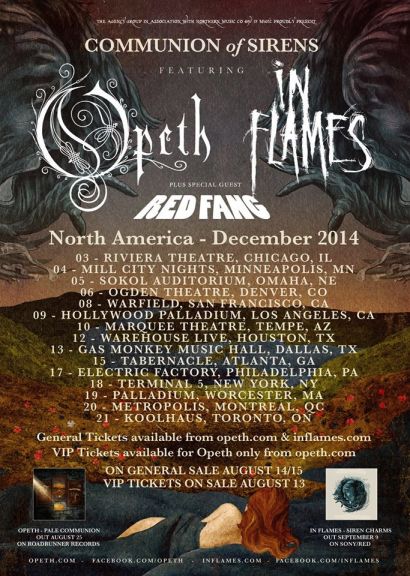 Swedish prog metallers OPETH have announced their return to North America for a coast-to-coast co-headline run with IN FLAMES. The nationwide trek, which will also feature support from RED FANG, is set to get underway on December 3 at the Riviera Theatre in Chicago, Illinois and traverse North America through the end of the month. Limited presale tickets and VIP packages will be available beginning today, August 13 exclusively through WMG with general public on sale starting Friday, August 15.

“We are delighted to return to North America to tour our latest album, Pale Communion,” commented OPETH’s Mikael Åkerfeldt. “This will be the first of two North American tours and the fact that we are teaming up with our old friends IN FLAMES for this co-headline tour means that we can get to play some large venues and present our new stage show. I am also looking forward to drinking expensive whiskey with Anders on his account!”

IN FLAMES frontman Anders Fridén added: “I met Mikael for the first time in 1998 during the recording of OPETH’s album My Arms, Your Hearse. I was working in the studio and we’ve been friends ever since. Now 16 years more beautiful, we release albums in the same cycle and it’s with great honor and pleasure that IN FLAMES share stage with our friends and fellow countrymen in OPETH.”