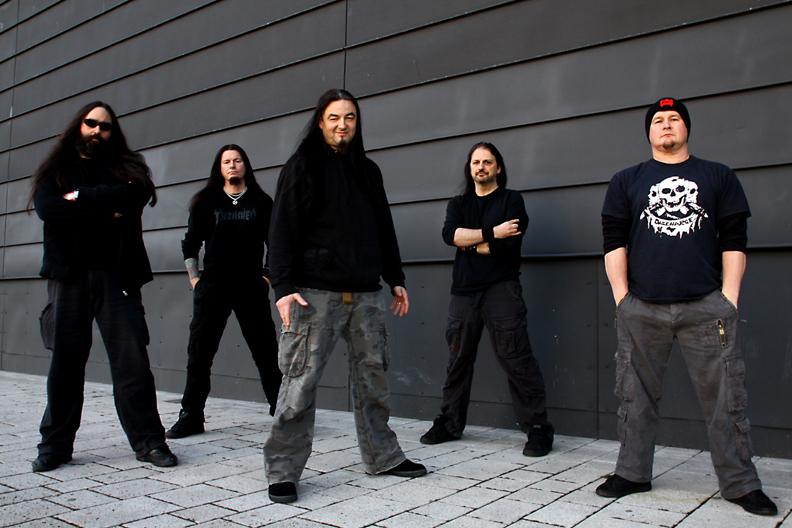 Legendary U.K. thrashers ONSLAUGHT have posted an update regarding work on the follow-up to 2011’s Sounds of Violence. The band, who is celebrating their 30th anniversary in 2013 – have announced Friday, September 13th as the worldwide release date for their sixth studio album via AFM Records.

An update from the band states: “What a totally crazy week this has been in The Onslaught camp! Nige Rockett and Andy Rosser-Davies have completed the recording of all 36 rhythm guitar tracks for the new ‘Slaught album, Mic Hourihan has completed all the drum tracking (which I can honestly say sounds truly fucking explosive!!) Things are rocking harder than we could have ever imagined right now…

In other news, we are extremely stoked to welcome Par Olofsson on board as the bands artist for the new album sleeve, the first rough sketches are awesome and in a very different style from every other album cover we have made, cant wait to see the final design!

Also been speaking to a very good friend and A&R guy from London Records-era about something which is very very interesting and to cap off the week of madness, we are to take part in the longest in depth interview we have ever done with our friend Laurent from Snakepit fanzine… No rest for the wicked.”

Guitarist Nige Rockett previously stated: “It’s awesome to be making another album with Jacob Hansen, there was never gonna be anyone else considered, simply because of the way Jacob works on a personal level and the incredible dynamics of his final mixes, we just know its gonna be totally immense! The writing is 90% complete and its sounding very very cool, I’m not gonna say its louder faster heavier than anything we’ve ever done because that’s a little bit cliché these days, all I will say is that it’s very fresh, it’s old school and its ferocious, the rest we’ll leave up to you guys to decide.”

The band will headline the first Slaughterfest across Europe in October, with German cult thrashers EXUMER, M:PIRE OF EVIL and MASTER completing the bill. Fans will have the opportunity to take part on Meet & Greet events on selected dates. Complete details coming soon.