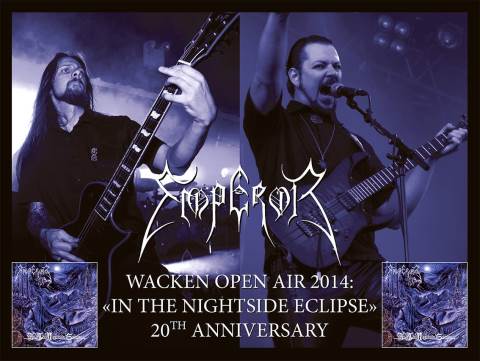 Norwegian black metal legends EMPEROR will celebrate the 20th anniversary of their masterpiece, In The Nightside Eclipse album at next year’s Wacken Open Air festival. EMPEROR members Ihsahn (real name: Vegard Sverre Tveitan) and Samoth (real name: Tomas Haugen) will be joined by Bård Guldvik “Faust” Eithun on drums, and they will perform the CD in its entirety.

The organizers of Germany’s largest metal festival, Wacken Open Air announced last week in a press conference that EMPEROR will be reforming to headline the event next year. This will also mark the twenty fifth anniversary of the famed festival and will be held from July 31 – August 2 in Wacken, Germany. Despite this announcement, there will be no new studio album or a worldwide tour — only a few exclusive festival appearances next year to mark the celebration of this landmark release.

EMPEROR last released Prometheus – The Discipline Of Fire And Demise in September 2001. The horde’s swansong saw EMPORER dubbed as one of the most adventurous and gifted black metal bands of all times. In 2005, EMPEROR surprised all with an unannounced appearance at Oslo’s Inferno festival. Following the performance, the band announced additional concerts that would include a visit to America; marking the second trip to the States in the band’s legendary career.