NILE: New Album Due In August

The reigning kings of technical, historically-themed brutality NILE are currently in the studio wrapping up the mix of their upcoming album, What Should Not Be Unearthed. Produced by NILE and mixed by Neil Kernon, the CD will be released on August 28 via Nuclear Blast. The artwork was handled this time by Michal “Xaay” Loranc and can be seen below. Pre-order your copy here.

He continues: “Our last record, At The Gates Of Sethu, was super surgically clean and very ‘musicianship oriented’ whereas the new disc is a polar opposite; ‘Unearthed’ is aimed straight at utter metal heaviness and memorable songwriting.

“Although ‘Unearthed’ is still full of the kind of undeniable musicianship people have come to expect from NILE over the years, it’s the songs themselves that will hit listeners over the head this time around.” 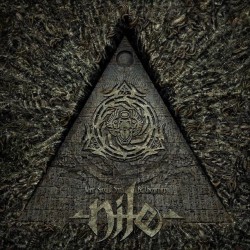