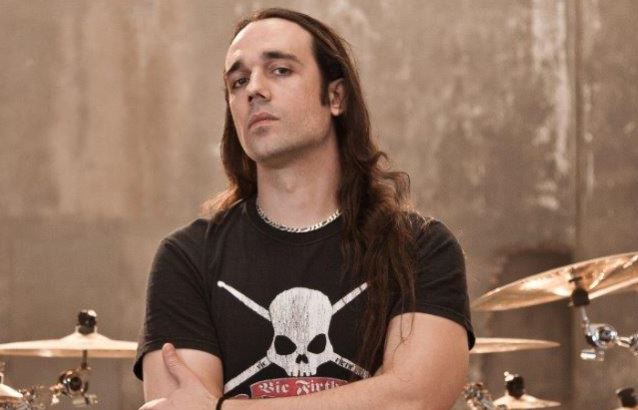 Season Of Mist has announced the signing of George Kollias. The exceptional Greek drum progeny and NILE percussionist will release his solo album debut, Invictus on May 18.

Kollias comments: “I am extremely happy to be a part of the Season Of Mist family and so excited for the release of my first album! I strongly feel this is going to be a very successful and productive cooperation between me and this label with a common goal: to deliver the best music we can to all of you out there! I would like to thank everyone at Season Of Mist for all their support and for helping me with the release of my first album. It means a lot to me and I will make sure to work even harder for more great music for all of you!!”

Regarding Invictus, the drummer, who is regarded as one of the world’s best by his peers, says: “This solo project contains exactly what the word ‘solo’ describes: one musician writing all music and lyrics as well as performing all the instruments, while inviting some guests to join.

“At first, I composed some songs in order to support my two drum DVDs, but thanks to the support and demand from all the fans out there, it turned into a full album over time. I can honestly say the only reason I have recorded this album is the fans asked for this to happen. I am happy that I did it and more excited than ever for the future of this project! I enjoyed recording it more than anything.

“I have got some great plans for my project. I want to get out there and play this album live as soon as possible too! I also had to pleasure to have some really important guests, which made this album even more special to me. I guarantee that this is only the beginning!!”

A teaser for Invictus can be seen below.

Most of the songs on Invictus were recorded in between the touring breaks of NILE. The album contains eleven tracks and four bonus songs and features some of the best musicians on this planet delivering guest solos. Two amazing vocalists make an appearance on the bonus tracks.

Says George: “This album is not only about drums, although I made sure that my drumming is absolutely out of control. It is all about music and that is it.

“I have made my solo record with a lot of passion and dedication for all the fans out there and I feel blessed to have some of my best friends appearing as guests on it. Invictus turned out exactly in the way as I had wished for and I can assure you that this is just the beginning! There are a lot of great things to come!”