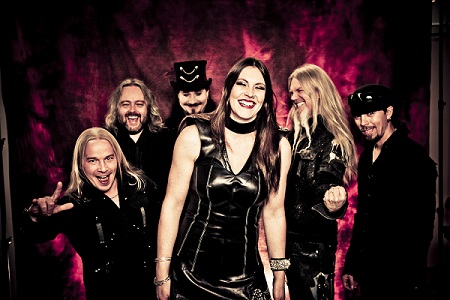 “Ms. Floor Jansen is a keeper. Also, we will be a six-piece band from now on, as Mr. Troy Donockley (uilleann pipes, low whistles, vocals) will become a full-time member of NIGHTWISH Originally we were going to wait until 2014 to make a decision about the future line-up of the band, but the past year has clearly shown us that Floor and Troy are perfect matching pieces to our puzzle, and we are really grateful of the bond that has grown between all of us. We love you guys.”

Commented vocalist Floor Jansen: “Words cannot describe what I feel! This union is beyond everything and I cannot tell you how wonderful it is to continue this amazing journey with my new brothers! Once I had a dream…and this is it!!!”

Added vocalist, piper/whistleman Troy Donockley: “Imaginaerum World Tour was a revelation to me and in that time, I became aware of a growing unity and then, finally, a transcendence of all the usual nonsense that affects bands. A beautiful process. And since the idea, the musical dream that is NIGHTWISH has been a part of me since before I was born, I am delighted to officially sail into uncharted waters with my brothers and sister. Wondrous scenes Ahoy!”

Showtime, Storytime contains the entire NIGHTWISH headliner show, played at this years’ legendary Wacken Open Air – the world’s biggest heavy metal festival. The live show in the front of 85,000 screaming metalheads was directed by Ville Lipiäinen, filmed with seventeen cameras and has a total duration of 85 minutes.

The second disc consists of 120-minute tour documentary Please Learn The Setlist in 48 Hours – also directed by Ville Lipiäinen – with no short of drama or overall madness. Also, there is a 16-minute NIGHTWISH Table Hockey Tournament, filmed on tour. On top of this there are two music clips: ‘I Want My Tears Back’ (Live at Hartwall Arena) and ‘Ghost Love Score’ (Live in Buenos Aires).