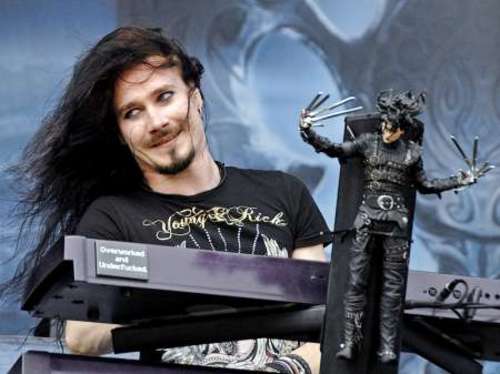 “Since returning from the lovely tour-ending trip to Thailand with the whole band and crew, I’ve been hibernating deeply in the wondrous world of Don Rosa’s Scrooge McDuck stories.

It’s been four months of heavy songwriting, arranging, toying around with ideas, lyric writing and demoing.

We hired a log cabin in the middle of the woods in Southern Finland, and during an intensive ten-day period, we recorded a demo with Tero (TeeCee Kinnunen) of all the songs.

Tero will take care of the engineering and mixing of the album. The guy has incredible insight and ears, and he already came up with a couple of good points regarding some of the songs. (As some of you might remember, ‘Nemo’ was originally over 6:30 long, much more uptempo, with a duet rap-part with Tarja and Marco in the c-part (!!) Hah! Tero was the one to open my locked-up, stubbornly stuffy ears with that one…)

There will be a total of ten songs, with running time between 55-60 minutes. Six of them will feature vocals, both male and female. It’s quite difficult to categorize the genre of the album, but to my ears, it’s somewhere between film music, folk and classical, echoing distantly the works of Vaughan Williams, Enya, Mike Oldfield and Michael Nyman. Loaded with keys, piano, orchestra, Metro Voices and ethnic percussion, it will also feature acoustic guitars, banjo and some human voices.

I feel extremely enthusiastic about how the songs turned out, they echo the ‘Life And Times’ storylines well. A whole new challenge for me was to find a way to catch the comical side of the chapters into some of the songs. Humor is such an essential part of the book I just couldn’t / didn’t want to ignore it. But writing soundtrack to comedy was a sweaty ordeal. I leave it up to you to judge how I was able to pull it off.

Also, I chose not to be too slavish to the chapters of the book. So that the songs would make sense even though you never read the book. For example, the opening track is inspired by the first chapter of the book, and while keeping the atmosphere of that story in mind, I purely imagined what it would have been like in Scrooge’s childhood, in Scotland of the 1870s.

These ten songs are what I hear inside my head when I read those awe-inspiring stories. That’s the best way I can put it.

Pip (Williams) now has all the material and the next three months will be spent discussing the arrangements and practical issues in the phone and via e-mail. Then at the end of August, the fun in London begins. Beautiful scenes ahead!”