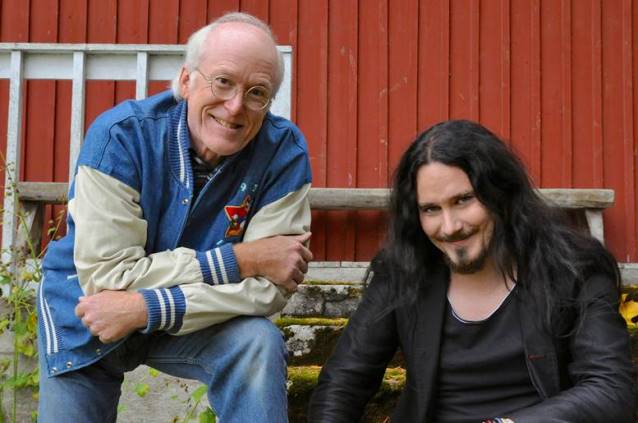 Tuomas Holopainen — the keyboardist and main songwriter of NIGHTWISH — has spent most of 2013 writing and producing his solo album based on a graphic novel called The Life And Times Of Scrooge McDuck, written and illustrated by Don Rosa.

Music Inspired By The Life And Times Of Scrooge – Written And Produced By Tuomas Holopainen is scheduled for a release in April 2014 via Nuclear Blast.

Holopainen comments: “This is my longtime dream come true, 14 years in the making. And a homage to one of the best storytellers of our time.

“Thank you for sharing this celebration of life and adventure!”

This 12-chapter book tells the life story of Scrooge, from his early years in the 19th century Scotland to his adventures all around the world until the 1950s. The story contains such immense depth, detail, wit and emotional power that the moment Tuomas read it nearly 20 years ago, it instantly became a story of profound personal interest and love for him. The initial spark of “coloring” this story with music, i.e. creating a kind of “soundtrack” for the book, came to him already in 1999, and has ever since haunted the back of his mind.

Music Inspired By The Life And Times Of Scrooge – Written And Produced By Tuomas Holopainen contains 10 songs, with total duration of approximately 60 minutes. The music is said to be in the soundtrack / classical / folk genre in the vein of Vaughan Williams, Michael Nyman, James Newton Howard and Enya.

Pip Williams did the orchestral arrangements for the Life And Times Of Scrooge disc, continuing his collaboration with Tuomas after the NIGHTWISH records Once, Dark Passion Play and Imaginaerum.

The recordings took place during August – October 2013, first at Angel Studios in London, then in various locations around Scotland and Finland.

The author of the book, Don Rosa, did the artwork for the album.

There will be a single release, for the track “A Lifetime Of Adventure”, and a music video to go with it in early 2014.