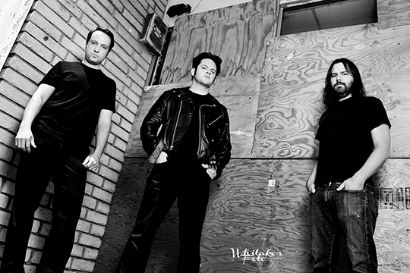 Having recently released their self-titled debut EP via Shadow Kingdom Records, Oxnard, California NWOBHM-inspired upstarts NIGHT DEMON have announced a series of one-off shows in support of the EP. At the end of September, the band will enter the studio to commence work on the full-length follow up to their four-song debut. The full-length will be released on a yet-to-be-determined label.

This California trio, featuring members of THE FUCKING WRATH, first started making noise in 2011. Shortly after establishing an online presence via Bandcamp, the organizers of Germany’s Keep It True Festival offered Night Demon a place on the fest’s 2014 line-up.

British metallic stylings reminiscent of ANGEL WITCH, RAVEN and IRON MAIDEN are kicked into overdrive with an edgier and gritter dose of American venom. A video for the song ‘Night Demon’, filmed, directed and produced by the band can be seen below: