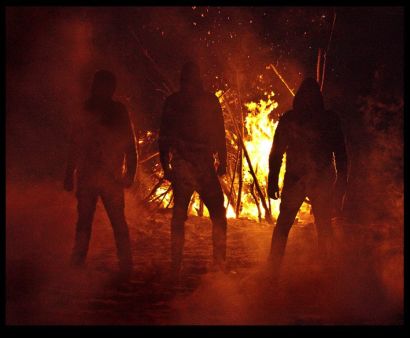 Pulverised Records welcomes diabolical Swedish black metal overlords NIDSANG to the label roster. Forged in hellfire during 2004, Nidsang very quickly rose to become one of the most wrathful extreme bands around; absolute relentless and cold-blooded black metal that sounds like no other even until today.

Now after a decade since the band’s inception, NIDSANG have returned triumphantly in its serpent form and back with their most powerful album to date, entitled Into The Womb Of Dissolving Flames. The cover artwork was designed and depicted by Petter Leijon and can be seen below.

Into The Womb of Dissolving Flames track listing:

In an official statement by the band: “Restless it lie in the filth of creation. Years of silence have not been in vain. At last, the restless hunger spawned seven songs of madness – Into The Womb Of Dissolving Flames. It is our greatest achievement up to this point, uncompromising and sincere. The signing with Pulverised is a step in the right direction.”

Pulverised Records A&R manager Calvin Chiang also commented: “Without any doubt, the new Nidsang record is one of the most crushing black metal album we have heard recently, but by putting them into the black metal category does sounds somewhat pigeonholed. Into The Womb Of Dissolving Flames contains all the essence of transcendent songwriting and with just the right dosage of dissonant brutality, the new album is probably Nidsang’s most accomplished and diverse album to date and never for a moment compromising on what truly is NIDSANG’s undeniable trademark sound.”