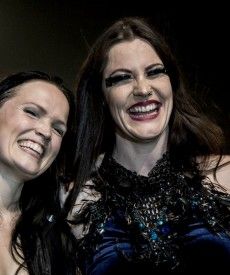 Metal Female Voices Fest 2013 took place October 18th – 20th at Oktoberhallen in Wieze, Belgium. Among the acts performing was former NIGHTWISH vocalist TARJA TURUNEN, who invited current NIGHTWISH vocalist Floor Jansen (REVAMP, ex-AFTER FOREVER) to the stage for a duet on the GARY MOORE classic, “Over The Hills And Far Away.”

Floor has posted a blog recalling her experience at the fest. An excerpt follows:

“After an hour of ReVamp I had some time to sit and breath before joining Tarja. Change of outfits was nice to do of course. Ingeborg Steenhorst, who designed and made my outfits was there at the festival too with her stand. I was wearing her creations with pride! The duet was the very last song of Tarja’s show, and by that the very last of the entire festival. It felt like a grand finale! It was great fun on stage! There was such a happy vibe in that hall, the audience, the band, us singers, all in one happy emotion. The good one of making music together. No soaps, no discussions about who’s better, prettier and all the bullshit (we singers get sooooo tired of that)… only music and happiness. A clear signal!”

Video footage of the duet can be seen below.