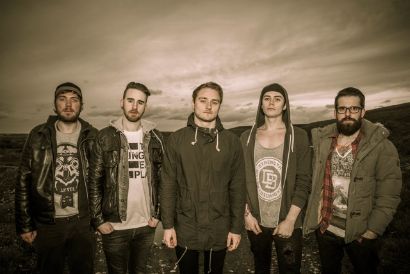 Progressive German metal band NEBERU will released their debut seven track EP Impulsions through Famined Records. After relentless recording and playing, NEBERU’s debut EP Impulsions will be released on December 24th in the United States and in Europe. This is the band’s first release to go global.

The EP features seven that rip apart the standard for any progressive metal band and establish a new foot hold. NEBERU enlisted the help of Kyle Anderson (THE AFTERIMAGE/CENTURIES APART) to help bring forth the lyrical intensity of the album to the listeners.

A press release describes the release: “Impulsions takes listeners on a furious whirlwind of gut-wrenching guitars to the eccentric power of drums topped with the lyrical domination of lucid story telling. The EP opens up with a sad soul clinging to life, asking for help from anyone that is listening, only to find nothingness. Impulsions then delivers the full force of a relentless onslaught to the listeners ears.”

“The debut single ‘Decompressed’ marks the milestone of the promising career of NEBERU followed by the sleeper single ‘Alleviate’ featuring Kyle Anderson from The Afterimage and Centuries Apart. Kyle delivers the lyrical emotion that has brought The Afterimage to the steps of musical genius to Impulsions. Trust us when we say that this album will be your new metal EP of the year.”