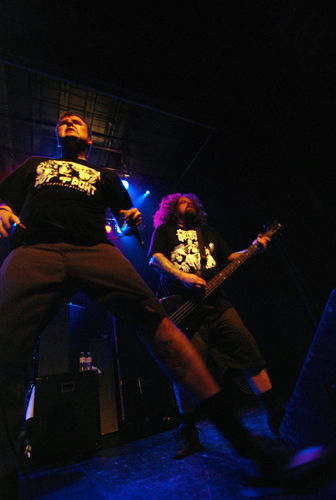 A new live collaboration between NAPALM DEATH and KEITH HARRISON under the name Bustleholme has been announced for Friday, November 29. Initially created for the V&A, this explosive performance has been given a new life in the Modernist setting of the De La Warr Pavilion.

The band will play a special live set through an experimental sculptural sound system constructed by Harrison. Clad with blue and yellow ceramic tiles, the raw, uncompromising energy of NAPALM DEATH ‘smusic will activate a set of three specially created ceramic sound systems, which will disintegrate as the performance progresses.

Keith Harrison says:
“My interest in NAPALM DEATH started in the late eighties when as a teenager in Birmingham I would listen to John Peel’s evening radio show when they would appear out of nowhere in jaw dropping fashion, sometimes for no more than a few seconds.

The raw, uncompromising energy of NAPALM DEATH will be used to activate a set of three specially created ceramic sound systems based on the group of vivid blue and yellow tiled tower blocks on the Bustleholme Mill Estate, West Bromwich where I was born.”

Mark “Barney” Greenway, vocalist of NAPALM DEATH says: “Sound as a weapon – or a weapon of change – is a very interesting concept and I think that the whole process of our sound gradually degrading clay sculptures is captivating. The noise element of music should never be understated and this event at De La Warr Pavilion will hopefully demonstrate that music can do interesting things beyond the realms of clipped production techniques. On a personal level, particularly of interest to me is the fact that the sculptor Keith grew up around the very same area as me in Great Barr, Birmingham, and basing his sculptures around the tower blocks in that area brings back a lot of quirky memories mixed with the impressions of shameful deprivation in some of those places. Bustleholme is a challenging and exciting proposition, a bringing together of artists operating at the outer limits of their respective genres to create a unique happening that pushes the boundaries of artistic expression.”