MINISTRY: EPK For Enjoy the Quiet – Live At Wacken Posted 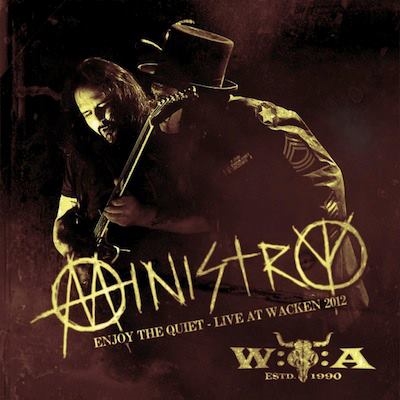 An EPK (Electronic Press Kit) for Enjoy The Quiet – Live At Wacken 2012, the final live DVD for industrial metal pioneers MINISTRY has been posted below.

The disc captures the final show of the band’s 2012 “Relapse” tour at Wacken Open Air festival in Wacken, Germany. Frontman Al Jourgensen was still battling severe dysentery when he took the stage at Wacken on August 3, 2012 in front of 75,000 screaming fans. Through sheer willpower, he was able to hold himself together and perform in Wacken at his utmost peak with a band of traveling bandits he considered close friends as well as gifted musicians.

“Mikey was in his version of heaven at Wacken,” Jourgensen says. “His guitar playing was the heart and soul of MINISTRY and he loved that band more than everyone — even me. He’s the one who convinced me to continue when I swore I was done with it.”

From Beer To Eternity is dedicated to the memory of Scaccia, as is Enjoy the Quiet – Live At Wacken, which will debut at the already sold-out 2013 Wacken Open Air festival in Germany August 1-3, 2013. The project is a collaboration between 13th Planet Records and UDR/Wacken Records GmbH.

Jourgensen says: “Not only is this DVD a great recording of Mikey at his absolute best performance, in his element, having the time of his life, it’s one of the last live official videos of the band ever. If you didn’t see the tour, you’ll want to catch what you missed. And if you were there, well, you saw a piece of history and the DVD will make a great souvenir — or a great drink coaster.”

Enjoy The Quiet captures the transcendent chaos of MINISTRY’s sixth-to-last performance in all its kinetic glory. The fourth live MINISTRY release, the DVD may be their best yet. The members were all clean and the chemistry between the musicians was spellbinding.

“Seriously, the Wacken show was special,” Jourgensen says. “The crowd was great and the band were so tight and heavy, they blew everyone away.”