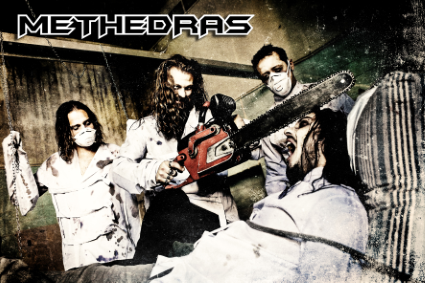 In recent years, thrash metal is having a new life, with numerous bands that have resurrected the glories of the 80’s, with a more modern sound, and in some cases also new ideas that carry the genre to new territories.

I love so much the recent production of the teutonic thrash metal heroes Kreator and Destruction, especially Kreator’s Enemy Of God and Violent Revolution, and Destruction’s The Antichrist. These cds are a brutal assault to the ears of every single metalhead, with very good production, and great riffs and solos.

From U.S.A. I listen a lot of Exodus, Machine Head, Nevermore, and Overkill. Machine Head are one of my favourite bands of the last decade. They started their career with an incredible album like Burn My Eyes, and recently repeated it with two CDs like Through The Ashes Of Empire and, of course, The Blackening, in my opinion the best thrash metal album of the latest years, with an incredible production, tons of killer riffs and solos, and a supreme singer like Rob is. I think that The Blackening broke with the recent returning of the 80’s thrash metal, it is a modern way to see this kind of metal, with some new ideas that bring a breath of fresh air in that genre. The same thing that Nevermore’s doing, with their modern thrash metal, and their personality.

However, I listen to a lot of other genres, in death metal I loved so much the reunion album of Carcass, all the recent production of Cynic (but it’s hard to define as “death metal” with their last albums… I think it’s better to say “prog metal”) and many other bands!

Metheras is currently unsigned and seeking label backing for their upcoming album, System Subversion. Their previous album, Katarsis, was released in 2009 via Punishment 18 Records. A teaser for the song “Subversion” can be viewed below.