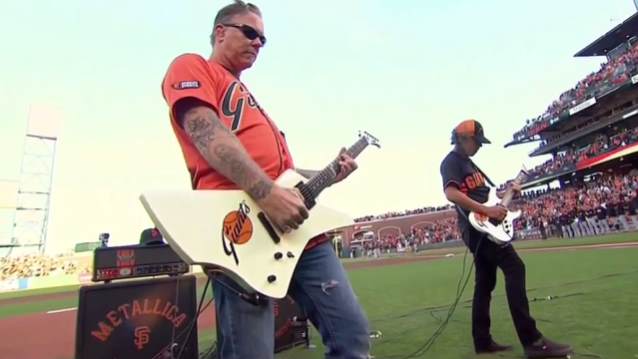 Metallica Night at AT&T Park with the San Francisco Giants took place on May 16th when the Giants took on the Miami Marlins. Video footage of James Hetfield and Kirk Hammett performing “Star Spangled Banner” and Hetfield introducing the starting line-up are available below.

Prior to last night’s festivities, Hetfield spoke to Bay Area radio station Live 105 and explained how this melding of rock and baseball came about.

“We are fortunate enough to live in the Bay Area and hook up with the Giants,” he said. “They are a bunch of local boys doing good and we are hopefully in the same department as that. It’s basically a fun night. Local people. Local music.”

He added: “This is our second time, so we did okay the first time, so we got asked back for number two.”

“What’s special about this is you can actually merge the two worlds together,” METALLICA bassist Robert Trujillo told the Associated Press at last year’s “Metallica Night”. “I feel that music is such an inspirational form of energy, as baseball is. And especially with METALLICA, believe it or not, our shows are very physical. Sports is a very physical thing, too.”

He added: “I’ve been a baseball fan in the early part of my life, so through the ’70s and the ’80s, I was a huge fan. I actually followed the Dodgers back then, back in the Kirk Gibson years, Steve Garvey. … It means a lot to me. It’s an honor to be here at this park, it’s one of the most beautiful ballparks in the U.S. and probably in the world even. It’s incredible. I don’t think any seat’s a bad seat here.”