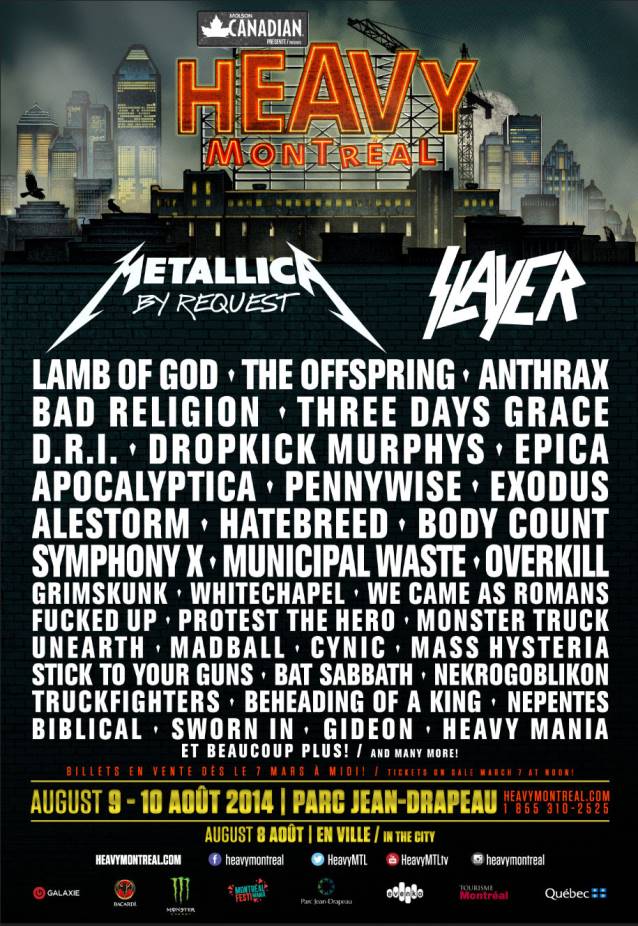 The time has come to reveal the 2014 lineup of Heavy Montréal presented by Molson Canadian, the can’t-miss rendezvous of heavy music lovers, back for its sixth edition this year. As announced previously, in order to reach a maximum number of fans, the festival will continue to widen its horizons by presenting a larger variety of bands, making it possible for the rock and metal family to expand and to attract festival-goers from all around the world.

Among those who will shake up Parc Jean-Drapeau on August 9 and 10, we find the ultimate heavy metal band, METALLICA, who will perform their only show in North America this summer at Heavy Montréal. Every ticket holder will be able to send their request to the band with code provided to them following their purchase. Furthermore, it will be an all-request show, with a setlist picked by the fans! Other confirmed acts include SLAYER, ANTHRAX, LAMB OF GOD, APOCALYPTICA, EXODUS, SYMPHONY X, OVERKILL and many more!

A fourth stage will be added this year in order to showcase more artists, including many local bands, and to maximize the festival experience for the fans. And, after a ton of success last year, the Heavy Mania wrestlers will return to Heavy Montréal this summer. More details will be announced about this in the next few months.

Heavy Montréal billing is shaping up as follows:

Weekend passes for Heavy Montréal 2014 will go on sale on Friday, March 7 at noon via HeavyMontreal.com. New this year: Gold Weekend Pass holders will have access to the Heavy Montréal terrace, a multi-level platform offering a premium view of the two main stages, with access to private washrooms and exclusive food and beverage stands.

Those prices are available for a limited quantity of passes! Weekend passes are valid for two days and are non-transferable.

Says organizer Nick Farkas: “From its inception in 2008, Heavy MTL was created as a festival that would embrace the heavier side of music, from guitar rock to metal and everything in between. For 2014 we are excited to present a reinvigorated Heavy Montréal. With a brand new look and a programming direction that returns to our roots, 2014 is poised to be Heavy’s breakout year.”

This year, the festival is also introducing a new logo, in the image of its renewed identity. The logo and the new identity were created by artist Pat Hamou under the direction of Heavy Montréal’s programming team.

“We wanted to have a logo that reflects our roots but that also celebrates Montreal and its landmarks,” added Farkas. “The logo also represents our desire to be more inclusive. We are very happy with the result.”

Heavy Montréal will announce more bands, the August 8th lineup in the city and the daily lineup soon. 2014 will undoubtedly be an explosive year for Heavy Montréal!