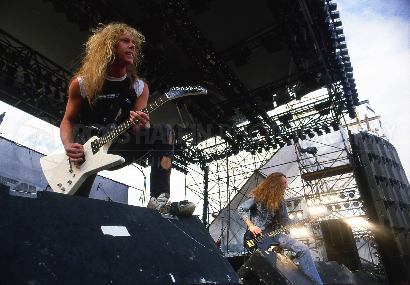 Famed metal photographer Ross Halfin has unearthed some old photographs and checked in with the following update:

“METALLICA: Donington 1985. I found a load of old strips of film of Metallica in a box this is unseen I’ll put up some more.”

Halfin is best known for helping launch Kerrang! magazine in the early 80s, and shooting the likes of METALLICA, VAN HALEN, DEF LEPPARD, IRON MAIDEN, and more during their heyday.

METALLICA’s official YouTube channel MetallicaTV has uploaded fly-on-the-wall footage shot by the MetOnTour reporter on March 20th in Lima, Peru. Footage includes the boys warming up in the Tuning Room as well as ‘The Four Horsemen’ and ‘Whiplash’ from the show.