MELECHESH Checks In From The Studio 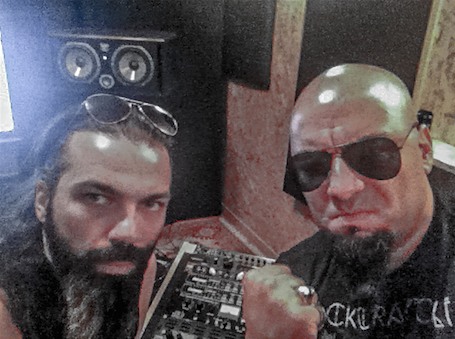 Kings of Mesopotamian black/thrash metal, MELECHESH, are currently in Athens, Greece recording their sixth full length album to be released worldwide via Nuclear Blast on a yet-to-be-determined date.

The band had spent one month in their rehearsal room in Germany tweaking all the details and will spend the next six weeks in Athens recording the new album, tentatively entitled Enki.

Commented bandleader Ashmedi: “Again we chose to record in a Mediterranean area to capture the MELECHESH essence. We have many good friends here and have toured with some Greek bands over the years and everyone here is being very helpful to this work. In keeping with our tradition all songs are diverse and tell different stories both lyrically and musically, from the black thrash to the ritualistic tribal tunes to the more in your face rocking and neck breaking songs. Last couple of years where extremely challenging for me and this rubbed on the album for the better, abstract moods such as post-enlightenment depth, sonic magick, anger and retribution. Metaphorically speaking, it is a Sumerian sonic deluge to cleanse us from drones, parasites and insects interpret that as you see fit.”

The recording (with the exception of the Drums), mixing and mastering are currently taking place at Grindhouse Studio Athens, under the supervision of producer and engineer George Bokos.

Added Ashmedi: “…so far the collaboration is great and George is working tirelessly and pushing us to the limits to get the best results”.

The drum sessions were recorded at Devasound Studio, engineered by Fotis Benardo “Fotis did an amazing job went above and beyond to get a killer drum sound, class act. New comer Narsam did some serious and relentless beating on the drum skins.”

The band also revealed some first song titles:
‘Enlil Enraged’
‘Metatron and Man’
‘Multiple Truths and the Mechanics of Religion’
‘Tempest Temper’
‘The Palm, The Eye and Lapis Lazuli’

Long-time friend and guitarist Moloch will be joining the band in the studio to record some traditional instruments and leads, Moloch also contributed a couple of riffs to the album.

The same line up, with the exception of Moloch, will also be the touring line up. The band’s conceptualized Nomadic Soul will play session guitars on tours.

All other announcements regarding members who were supposedly members in the band are void due to glitches which were beyond our control.

“Scorpios has been in MELECHESH for two and a half years but we never announced him, others were not in the band for a day but were pushing for press announcement for some reason or another, but in reality they were not members, its behind us now. Moloch is and always will be a part of MELECHESH in one way or another. Narsam came in the picture last june and came from Toulouse , France to the rehearsal room in Germany and spent one month rehearsing with us, he finished his sessions last week and he did an great job. As always live we go on with a session Nomadic Soul, whoever is under this veil is one.”