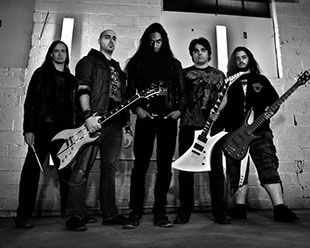 New York City metallers MARTYRD have confirmed a run of tour dates in support of METAL CHURCH. The band will be touring in support of The Mortal Coil which reached #14 nationally on the CMJ Loud Rock Charts.

“I love METAL CHURCH!” exclaims MARTYRD guitarist, Michael Andreas. “Their heavy melodic sound has definitely had a huge influence on me as a musician, and I’m really honored to be able to go out and share the stage with them on this tour.” And as singer Aaron Pollard adds, “F*** yeah! I can’t wait to get on the road again in 2014, what better way to do that than with METAL CHURCH!”