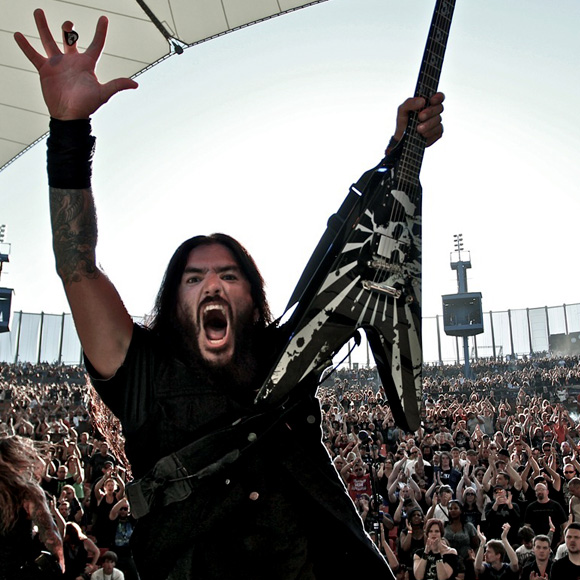 MACHINE HEAD frontman Robb Flynn’s latest installment of his online blog, “The General Journals: Diary Of A Frontman… And Other Ramblings”, reads as follows:

“Most of my favorite records weren’t #1. Because being #1 often means playing to the lowest common denominator. It means dumbing your music down to such a level that every soccer mom and mini-van driving dad can enjoy it as it plays in the background. That said, there have been some exceptional, authentic records that came in at #1, but it’s very rare. To me, 95% of the time it means watered down music.

“So I started researching it, fucking-around-on-the-Internet, and man, there are a lot of records, surprising records, that never got to #1 here in the U.S. I was gobsmacked considering the importance of the music.

“Here’s a list of my favorite albums that DIDN’T chart at #1 and never got to #1 on the U.S. charts: (‘peaked at’ refers to the highest position it got to, not what it ‘debuted at’ which many times was much lower)

* Back In Black (peaked at #4, over 22 million sold in the U.S.)
* Master Of Puppets (charted #128, peaked at #29, certified gold a year later, 6 million sold in the U.S. to date)
* Ride The Lightning
* Vulgar Display Of Power (peaked at #44, 2.7 million in the U.S. to date)
* …And Justice For All
* Reign In Blood (peaked at #94, six years later certified gold)
* Seasons In The Abyss (peaked at #57, four years later certified gold)
* Peace Sells…But Who’s Buying?!
* Disintegration
* Korn (debut)
* Revolutionary Vol. 2
* Antichrist Superstar
* The End Of Heartache
* Hellbilly Deluxe
* Never Mind The Bullocks…Here’s The Sex Pistols
* Among The Living
* Dirt (peaked at #9)
* Facelift
* Feel The Darkness
* Chaos A.D.
* Straight Outta Compton
* A Rush Of Blood To The Head
* Songs For The Deaf
* Paranoid (peaked at #23)
* Masters Of Reality
* It Takes A Nation Of Millions To Hold Us Back
* Sabbath Bloody Sabbath
* Appetite For Destruction (debuted at #182, and took over a year to eventually get to #1)
* The Real Thing (didn’t even enter the charts until 8 months after release, peaked at #11)
* As The Palaces Burn
* Slipknot (debut)
* Led Zeppelin IV (peaked at #2, yep, the album with ‘Stairway To Heaven’ never went to #1, over 23 million sold in the U.S.)

“And #1 doesn’t mean great album, or long-term success. Let’s not forget that back in 2001 rap-rockers CRAZY TOWN had the #1 single in-the-world (!?) with ‘Butterfly’ and sold 1.5 million records in the U.S., did 2 Ozzfests, and was managed by Q-Prime (METALLICA and RED HOT CHILI PEPPERS management) for a minute. Huh!?

“There have been a few records that have gone to #1 that were great, heavy, authentic metal albums. Probably the finest example is PANTERA’s ‘Far Beyond Driven’, a record so brutal and uncompromising it’s shocking it did what it did. As far as rap records go, EMINEM’s ‘The Marshall Mathers’ LP is by far the most extreme record lyrically to ever go #1, songs about killing his wife, (and well, everyone) drinking, drugs, sodomizing journalists, LOL! (1.7 million sold in its first WEEK alone, 10 million to date). METALLICA’s The Black album also a fine record, though there was an obvious conscious decision to slow down, and be more accessible. It worked on every level imaginable.

“We’re finishing up writing our new record. We have 6 songs done, and 2 half-songs that feel like they’re going somewhere.

“From time to time, you wonder where things will end up or chart, but it never really comes on our radar. It can’t, it dilutes the priority: authenticity.

“We’ve never tried to write a #1 album in our lives. The world is too fickle, tastes change, lives change, you just write for yourselves, maybe think ahead to what might work live, but ultimately, come up with ‘what feels right.’

“It’s an arcane process, like walking through a pitch-black room feeling the walls, looking for a door knob, and soon you find it, and that opens up to another pitch-black room, but eventually you see light under the door crack, you can feel when you’re getting close, and soon find your way out. It’s an incredible feeling when you do. I feel like we can see the light under the door crack, but haven’t found our way out yet. It’s daunting, a little nerve-wracking, and exciting all at the same time.

“We’ve booked GREEN DAY’s JingleTown studio in East Oakland again, and we’ll be starting on October 30th. Behing the board stuff will be the same team that did ‘Locust’, Juan Urteaga and Brad K. engineering, myself producing for the fourth time.

“So like I said, we’re 6 songs deep, not quite finished, I feel like we still need a ‘Locust’-type song. Still need an epic opener.

“We posted a picture of the song titles a week ago: ‘Killers & Kings’ definitely feels like a ‘track 2.’ Uptempo, will be great live, big shout-along chorus. Not sure where the rest are as of this Journal. There are some fast ragers (‘Ojos De La Muerte’), one with an old-school hardcore / ‘More Things Change’ flavor (the Manson-murder-themed ‘Night Of The Long Knives’), ‘Beneath The Silt’ has a ‘Elegy’-type vibe to me, but with way better execution, ‘Sail Into The Black’ has a ‘Descend The Shades Of Night’ sorta-feel but darker, and is the only long song of the bunch at 8 minutes, the others (for-no-reason-in-particular) all clock in at 4 or 5 minutes.

“Do any of them sound like radio tracks? Do any scream #1 album? Fuck no. That isn’t the goal. It can’t be. You know why? Because we’re metal musicians, we’re supposed to be the pioneers, the ones railing against the system, the ones challenging the norm, the ones pissing people off, the ones who 20 years from now will be held in the same reverence that we now hold the classic rock artists or the classic thrash artists for testing the limits, for pushing the boundaries of music as we know it. For going where the other bands of that era wouldn’t, who were on a ‘highway to hell,’ who went faster and heavier and longer, and more intricate, more provocative, more confrontational, more ‘FUCK YOU! That’s what made that music so damn exciting, so god damn exhilarating!!

“If we’re not doing that, as artists, as metal musicians, as songwriters, then we’re just stagnating, we’re loitering.

“Have you ever seen a cop get rid of a group of people loitering? They just calmly break up an aimless crowd and go about their business.

“This is MACHINE HEAD and if we’re doing something we stand behind, the authorities better break out the riot gear because there’s nothing aimless about this.”