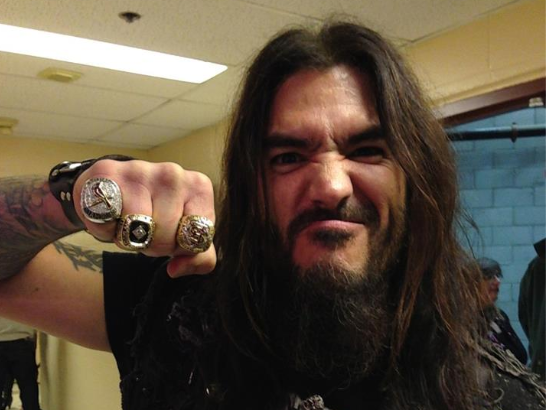 Robb Flynn of San Francisco Bay Area metallers MACHINE HEAD has posted the latest installment of his online blog, “The General Journals: Diary Of A Frontman… And Other Ramblings”. It follows below in its entirety.

“Not for the story I’m about to tell, but because of my thoughts afterward.

“I went out to San Francisco for my buddy Joe’s birthday shenanigans. We went out for Moroccan food at a joint called El Mansour. The place had a great vibe, belly dancing, sword balancing, and amazing food! The lamb in particular was to-freakin’-die-for, slow roasted and covered in honey and cinnamon.

“On the way out there, Joe’s buddy Tony picked me up from JingleTown [studio], since I didn’t want to drive as I knew I’d be drinking. On the hour-long trip out (Saturday traffic to San Francisco), he was telling me some pretty awesome stories about growing up in the ”70s. You see, Tony was a teenager in 1975, and used to go the famous San Francisco venue Winterland. Winterland was before my time, but being part of the scene you heard the legend, the stories and the history.

“Tony is a big BLACK SABBATH fan, saw them back in ’75 on the ‘Sabotage’ tour and said it was a life-changing experience. Him and his buddies used to go to Winterland, load up on LSD, cigarettes, and weed, and go watch pretty much the cream of the crop of classic rock bands. TED NUGENT, SABBATH, DEEP PURPLE, JOURNEY, MONTROSE, you name it, he went and saw it. The shows would start and if people loved the opening band (essentially cheering non-stop) they’d get to do encores. He was telling me about a show JOURNEY (the opener!), killed it, and they got 4 encores, the support band got 4 encores! Then the headliner, MONTROSE, got 5 ENCORES! MONTROSE didn’t stop playing until 2:30 in the morning, everyone stayed, no one would even dare consider leaving and people experienced some of the best music of their lives.

“An opener getting encores, crazy…

“And the venue allowed things like this to happen. The venue just kept the bands rolling.

“All I could think of was ‘what an amazing time for music.’

“People wonder why the ‘classic rock’ bands were so good. They were playing by their own rules, and they had a culture of venues and people around that were as crazy and fly-by-the-seat-of-their-pants as the bands themselves. The promoters around that time did anything to make the bands happy and if it meant playing all goddamn night? Let ’em!

“I tell you right now, though, there isn’t a band out there who would play til 2:30 a.m. nowadays, let alone find a major venue that would even ALLOW such a thing.

“I remember when I first started going to /playing thrash shows, it was a very similar thing. It was no rules, no security, no safety, no curfews, and for the most part anything went!
Venues these days are mostly run with union workers. In most major cities, you have to take breaks during the day, where a band can’t even sound check for an hour because the union workers need a ‘break.’ Nowadays if you play 1 minute past 11 p.m. at any of the large union venues, it costs the band $1,000 dollars a minute. When we were out with METALLICA playing arenas they regularly play 20 minutes past 11:00 p.m., and they regularly paid $20,000 to do so.

“I went and saw PEARL JAM about a month ago, and they played one of the best, most truly rock ‘n’ roll shows I’ve seen in eons. It was fucking magical, Eddie Vedder drank 3 bottles of wine, and about 2 hours into the set, he started getting a little sloppy, forgetting lyrics, missing cues, it looked like it was about to fall off the rails. The band then they took a quick break and he came back and played ‘Black’.

“Let me tell you, it was magic! I’m getting goose bumps writing this, just remembering it. It was such a turn-around; it totally took the night to an even higher level. At this point they were already 45 minutes past 11. They played several more songs and eventually the Oakland Arena (currently called the Oracle Arena, until some different stupid corporate sponsor buys it and changes it to something ridiculous like Florida’s 1-800-Ask Gary Amphitheater) turned on the house lights, signaling them to stop. PEARL JAM said ‘fuck you!’ and played 2 more songs with the house lights on! Eddie Vedder then brought the band back out onstage to do an extra-long goodbye to the crowd. I love their fucking attitude.

“In the end, they played 70 minutes over ‘curfew’ and I’d imagine left Oakland about $70,000 dollars lighter to do so. Of course PEARL JAM can afford it, and frankly it gave every single person there one of the best shows of their life. But this gesture to keep the ‘room’ in a good mood in conjunction with the Winterland conversation, it got me thinking.

“On the one hand, I love PEARL JAM’s ‘fuck you, were doing it our way’ attitude, and on the other hand, it angered and depressed me.

“Only the METALLICAs and PEARL JAMs can pull things like this. Bands that have sold millions of records, and they can afford it.

“If MACHINE HEAD tried playing an hour over curfew at say, the House Of Blues in Dallas, Texas, we’d be walking out of there with our entire guarantee eaten up. Even if the fans wanted it, some venue would do their best to shut it down, cut power, close curtain, whatever.

“The music business has sucked the life out of creativity. No one is encouraged to take risks, no one is encouraged to push the envelope, because it’s all about first-week sales! It’s about pointless radio play and how good your last tour went. How venues and promoters are squeezing the last drop of spontaneity out of your soul by not ‘allowing’ you to playing past curfew and not drawing outside the line.

“When we play that game, we essentially applaud mediocrity.

“There’s nothing dangerous about music these days, there’s nothing surprising about it either. There can’t be. Other than PEARL JAM, the only ‘band’ that doesn’t seem to really give a flying fuck and plays by their own rules isn’t really a band at all, are they? Axl and the ROSES are known for bending the rules and telling the powers that be to ‘fuck off,’ but because their band is so confusing they come across as a joke. But people don’t see this. People don’t see any of this!

“And the reason you don’t care is because it’s too easy to get sucked into your phone, or your Facebook, or your Twitter, or your Tumblr, or your Instagram, or your games, or your TV shows.

“Music isn’t important anymore. Say it is all you want, but the fact is, the 2 biggest rock records of last year only sold 400,000 copies, neither even went gold.

“Music is in the background of a game. Why go to a show when you can watch clips of it on YouTube and bitch about how it stinks live?

“And you know what, I miss music being important! I miss live shows being important. I miss feeling a part of something that was so high on my list I’d crawl through broken glass to get it.

I’ve thought of tweeting or Facebooking something so many time and just went, ‘who cares’, why should anyone care about this, and you SHOULDN’T care.

“You’re all my ‘friends,’ you’ve all ‘liked’ me, but really, you’re not my friends, because we don’t know each other. You took a photo of me, or you interviewed me, or we talked after a show. And after you get past the initial coolness, of re-connecting with someone from high school on Facebook or Twitter, you realize you truly have drifted apart.

“I don’t want to be ‘friends’ with everyone; I don’t want to be ‘liked’ by everyone. I want to feel connected to something. And nothing I look at in the music business does that. I don’t get radio bands; I don’t get any of these fucking ‘scene bands.’ I don’t get bands singing about how great being American is, as if the geographic location you were born, (and had zero control over in any way shape or form), somehow makes us better than any other geographical place of birth!?

“I don’t get why people don’t want to see live music anymore, I don’t get it. Did you see the clip of Hetfield talking about how America needs to start ‘wanting’ music again? This is James ‘Fucking’ Hetfield talking, people! Didn’t those words do anything to anyone? Didn’t what he said make you feel a bit disgusted? I’m a METALLICA fan and those words being spoken kind of stung a bit.

“You can bitch all you want that MACHINE HEAD only does festival tours and only plays for 30 minutes, but all those bands (including us) that play festival tours, can’t draw squat when were not on festival tours. And even the big metal festivals are having troubles. Maybe the days of bands touring is coming to an end? Bands didn’t always tour, you know, Mozart didn’t hit the road for a year or 2 back in the day. Touring is really a phenomenon of the last 60 years or so. People didn’t always buy records, or CDs, or files, or streams, that’s also a phenomenon of the last 60 or 70 years.

“I don’t get the political fucking correctness of music anymore.

“I don’t get the narrow-mindedness of the world anymore.

“I don’t get people asking me every week to try and write ‘more like ‘Burn My Eyes’, please.’

“I don’t get religious nutjobs who think that when they die they’re going to 72 virgins when they get to heaven. (‘You’re guaranteed to get some pussy in the afterlife, boys,’ so obviously written by a man!)

“I don’t get religious fucking nutjobs who think that Jesus is coming back soon, wearing a white, blood-stained robe (stained with the blood of his enemies…whoever those are) and will be carrying a sword, and by ‘sword,’ the bible meant an AR-15!

“What did Napoleon say? ‘Religion is what keeps the poor from murdering the rich.’

“I don’t get why we need to hear ‘America The Beautiful’ and ‘thank a soldier’ in a TV commercial, 22 and 14 times respectively during the Superbowl.

“I don’t fucking get it.

“Something has to change.

“Someone has to stir the pot.

“Something needs to come along and wake us up out of the slumber.”