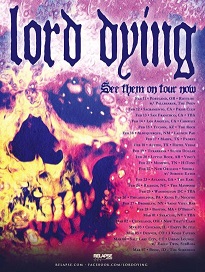 Portland, Oregon’s LORD DYING – featuring members of BLACK ELK , PORTALS, LE FORCE, and DAMN YOUR EYES – has been on the road non-stop since the release of their debut, Summon The Faithless, earlier this year via Relapse Records. Next year the band will be heading to Europe for the first time for an extensive tour with label mates RED FANG and TeePee Records artist THE SHRINE. Lord Dying will also be appearing at the 2014 Roadburn Festival.

In between the European tours, the band will be back stateside for a headline tour including select dates with PALLBEARER, THE BODY, SUBROSA, and EAGLE TWIN. The tour begins February 11th in Portland, OR and wraps up March 7th in Boise, ID.

Guitarist/Vocalist Erik Olson commented on the upcoming dates: “We’ve got a lot of dates coming up this winter, both in the US and across the pond. We plan to be crushing many beer cans and skulls. So come out and stay warm, it’s time to get awesome!”