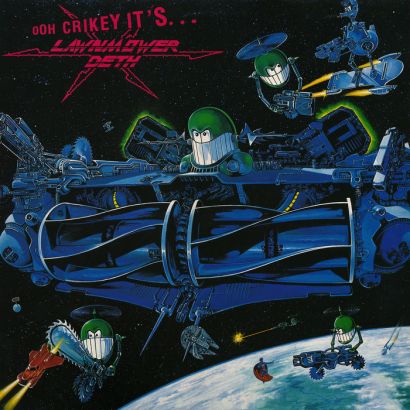 Having been unavailable for nearly twenty years, repeated demands from hardcore fans has led LAWNMOWER DETH  and Earache to launch a campaign to get the album remastered and reissued, with a range of suitably-mad items concocted for fans to pledge for and all profits going to the Sophie Lancaster Foundation.

LAWNMOWER DETH  frontman Pete “Qualcast Mutilator” Lee comments: “You know that giddy feeling you get. The one when you’re 9 and 3/4 old, that one where it makes you kick your legs, the one that makes you run down hills going ‘urgh-urgh-urgh-urgh-urgh’. You mean you’ve forgotten? Fear not. Here’s how to get it back. Them lovely people at Earache and now honorary buffoons have decided, after your years of pestering, to reissue the now legendary opus that is Dark Side Of The Moon. OK, they couldn’t get that, but they have got Ooh Crikey It’s…. Horns. Heard ya! And not only that, all profits will go to our most favourite and deserving charity, The Sophie Lancaster Foundation. We need your pledges, now! Show us the money. Show SOPHIE the money. You can always chuck the vinyl away afterwards.”

If the campaign is successful, the album will be reissued on CD and vinyl in a limited print run, remastered from the original tapes in Full Dynamic Range (FDR) audio, which allows the music’s nuances to shine through, giving the album a more ferocious, immersive and dynamic sound than ever before.

Fans can pledge now for signed band photos, Ooh Crikey It’s… LAWNMOWER DETH  CDs, FDR vinyl in a range of colours, never before released demo tracks, your name in the credits of the entire CD and vinyl print run and, in true LAWNMOWER DETH  style, signed original Weebles (rare vintage toys), a Satan’s Trampoline, adopt-a-sheep, and even a Qualcast lawnmower signed by the band.