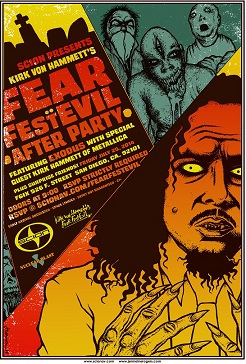 This special EXODUS performance will be highlighted by Hammett joining the band on stage for a few songs.

“Through Scion A/V, we are always looking for creative ways to merge the worlds of music and art that strike a chord with our customers,” explained Jeri Yoshizu, manager of sales promotions at Scion. “In addition to sponsoring several tours and dozens of special events each year, we also have the Scion A/V Installation where we support independent visual artists. Partnering with Kirk Hammett and his toy company helps bring distinctive music and art forms to an enthusiastic audience, which is what Scion A/V is all about.”

Since he was a young boy in San Francisco’s Mission District, Hammett has been fascinated by all things “monster” and “sci-fi.” From early years spent watching Creature Features to his present status as one of the foremost collectors of horror memorabilia in the world, the METALLICA lead guitarist’s passion for the macabre and mysterious has only grown deeper. In 2011, Kirk formed KVH Toys to enable him to create custom horror collectibles for like-minded fans, and in 2012 he published his critically-acclaimed first book, “Too Much Horror Business” (now in its third print run via Abrams Press) which documented the highlights of his famous collection. Hammett has also hosted special event screenings of his favorite classic horror movies at venues such as the Chinese Theatre in Hollywood and the Balboa Theatre in San Francisco.

In February 2014, Hammett launched his inaugural horror convention, Kirk Von Hammett’s Fear FestEvil, at the historic Regency Ballroom in San Francisco. Featuring a wide array of guests from the worlds of horror and music (“The Walking Dead”‘s Greg Nicotero to British legends of extreme metal CARCASS and fellow Bay Area thrashers DEATH ANGEL) as well as some of the most creative vending yet seen (including a taxidermy class), Fear FestEvil was lauded by horror fans and critics alike as a unique entry into the world of horror conventions.