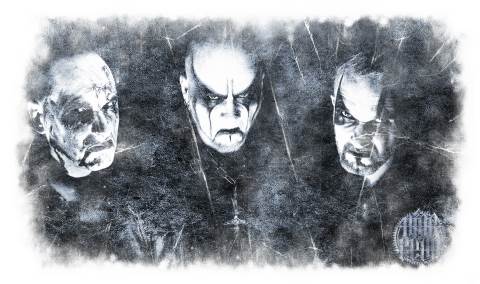 German black metallers KING FEAR have posted the cover art and track listing for the new album Frostbite, which will be on September 27 via Quality Steel Records/Soulfood.

After issuing its first five-track EP in 2012, the KING FEAR members went separate ways while singer Nachtgarm toured the world performing with NEGATOR and DARK FUNERAL, main composer Mål Dæth moved to the Austrian wilderness to create new music. Once winter struck again, the band gathered with their drummer BoneInn (ex-EISENVATER) in their hometown of Hamburg to start working on what was to become their first full-length album.

Inspired by the history of mountaineering, KING FEAR has created a full-length concept albumbased on the “conquest of the useless” — mankind’s possessive desire of reaching the highest mountain peaks.

Driven by the realization of how well these old tales of desire, passion, myth, ancient belief and frigid heights fit the KING FEAR version of black metal, they decided to call it Frostbite.

Musically, Frostbite is rooted in straight-forward black metal with a slap of black’n’roll. Great artists such as SATYRICON, KHOLD, SHINING (Sweden), CELTIC FROST and even ENTOMBED and TIAMAT have proven before: The fastest band is not necessarily the darkest band.