KATATONIA To Remix, Remaster and Perform ‘Viva Emptiness’ Live In Its Entirety 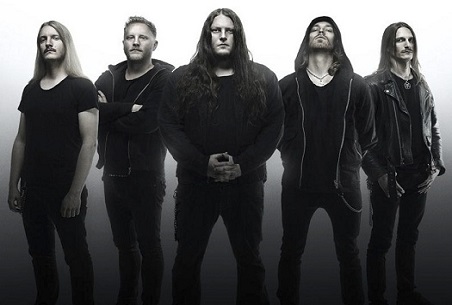 Fresh from their appearance at Download festival, KATATONIA, the Swedish purveyors of dark rock/metal, have been revealed as very special guests on PARADISE LOST’s “Tragic Illusion” 25th-anniversary tour in October alongside LACUNA COIL.

Concurrently, also celebrating their own 10th anniversary for their masterful sixth album Viva Emptiness, KATATONIA will perform the album in its entirety each night to make these shows even more special.

Originally released in 2003, Viva Emptiness is regarded by many, including the band members themselves, as being among KATATONIA’s finest albums. The CD cemented the band’s reputation as a major force, combining refined metal with doom and gloom angst-laden rock.

To coincide with the shows and the album’s 10th anniversary, Viva Emptiness will be entirely remixed and remastered by David Castillo, plus enhanced with new artwork courtesy of Travis Smith, for a re-release on November 4 via Peaceville.

Comments KATATONIA guitarist and founding member Anders Nyström: “Sometimes after an album has been out for a while, I always get the question if there’s something we would have wanted to change or done differently, and 99% of the time I say ‘no,’ because we have happily moved on! But there’s been one particular album that would in fact echo with a loud ‘YES’ to that question. Dear friends, that would be the album you know as ‘Viva Emptiness’…

“Truth to be told, this album’s session was so full of obstacles that it compromised the end result with a subpar production, undeservedly affecting the musical quality of the album. We have always, and still truly love the songs we wrote on ‘Viva Emptiness’ and regularly continue to incorporate some of its classics in our live repertoire, even to a point where we notably realized they sound better on a live record than on the original studio album. So up until now, it’s just been a dream of ours to go back and drag the album out of its ‘misery’ by treating it with what it so desperately has been longing for all these years: a complete remix and remastering.

“This year, time is approaching Viva Emptiness’with a 10th anniversary, so is there really something to celebrate? Oh yes, indeed! Our long lost mission objective will finally be completed! The album may now take that climb, in terms of audio quality, to be right up there proudly positioned beside its younger ‘album brethren’ — The Great Cold Distance, Night Is The New Day and finally Dead End Kings. We will give Viva Emptiness the sound and production the songs always deserved by having our long time studio rat and collaborator David Castillo work his magic at his Ghost Ward studio. Secondly, another longtime collaborator of ours, namely Travis Smith, will give the artwork an enhanced continuation of the original theme that will keep the visual aesthetes at bay! And last but not least, the crowning of the celebration: We will take Viva Emptiness’with us on the road and play the album live in its entirety while performing as ‘very special guests’ to our ‘tragic idols’ in PARADISE LOST, celebrating their own 25th anniversary tour this fall. Viva Viva Emptiness fulfilled!”