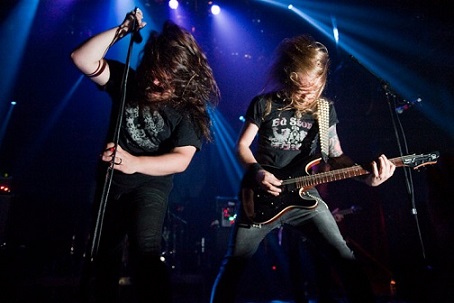 Swedish dark metal overlords KATATONIA will release a 12″ limited edition EP in the form of Kocytean for Record Store Day.

Says the band: “KATATONIA collectors and vinyl lovers will be pleased to know that we’ve compiled some of our most rare and appreciated b-sides on a 12″ vinyl for the first time ever! Printed on matte reversed stock and limited to 2000 copies, Kocytean will be available only from independent record stores, so get ready to hunt down your copy next month and enjoy this beautiful vinyl release!

4. Second
5. Code Against The Code
6. The Act Of Darkening

Kocytean is a wordplay on Cocytus or Kokytos, meaning “the river of wailing” (from the Greek Κωκυτός, “lamentation”) and is a river in the underworld in Greek mythology. Cocytus flows into the river Acheron, across which is the underworld, the mythological abode of the dead.

Guitarist Anders Nystrom comments on how the idea came up behind the artwork “I had this scenario playing over and over in my head and together with my graphics shrink Travis Smith decided to convey them down into a series of 4 images where it takes you through struggle, despair, tranquility and hope.”