Canadian extreme metal mongers KATAKLYSM have unveiled the cover art for their forthcoming Of Ghosts and Gods album, which is due July 31 via Nuclear Blast.

According to KATAKYSM, the “cover art echoes a sinister artwork depicting the reality of humanity’s beautifully disturbing existence and its impending death through the mortal and the everlasting. The background shows an ancient Incantation written in Aramaic.”
Of Ghosts And Gods track listing: 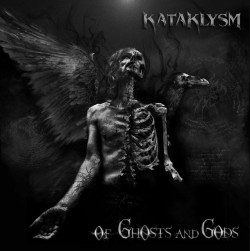