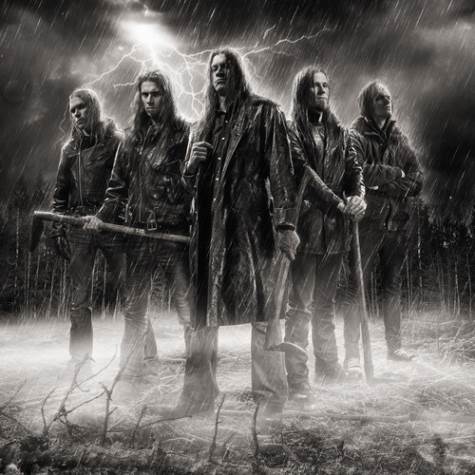 Finnish metallers KALMAH will release their new studio album, “Seventh Swamphony”, on June 17 via Spinefarm Records. The follow-up to 2010’s“12 Gauge” was recorded at Tico-Tico Studios in Kemi, Finland, and was mixed and mastered at Fascination Street studios in Örebro, Sweden byJens Bogren (OPETH, SOILWORK, PARADISE LOST). The new CD will feature cover artwork by Juha Vuorma, who worked on the first threeKALMAH albums as well as releases from USURPER, METUJA,DEATHMARCHED and ALTARS OF DESTRUCTION.

The second in a series of video clips featuring behind-the-scenes footage from the making of “Seventh Swamphony” can be seen below.

After 15 years together, with six full-length albums under their collective belt, 2013 sees the Finnish musicians delivering album No. 7 — an eight-track release showcasing this Oulu outfit’s trademark frantic, yet melodic death metal style, tempered here by a newfound “epic mournfulness.”

Commented KALMAH lead guitarist Antti Kokko: “This album marks a milestone in our careers. We have a new keyboard player, which has given a fresh edge to the music, and we are, of course, very satisfied with the new material. That is why we wanted to give the songs the best possible chance without compromise; we feel very lucky and privileged to have worked withJens Bogren.”

The song “Windlake Tale”, taken from the forthcoming album, can be streamed using the SoundCloud widget below.

Keyboardist Marco Sneck left KALMAH in 2011 after seven years and three albums with the band.

KALMAH‘s sixth album, “12 Gauge”, entered the official chart in the Finland at position No. 15.