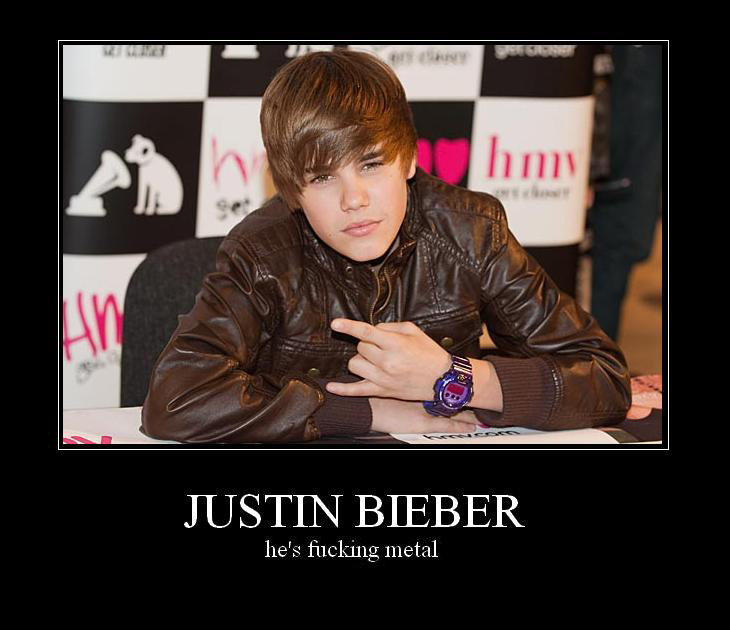 A backstage video of Justin Bieber performing an impromptu cover of METALLICA’s “Fade To Black” can be seen below, as reported by Blabbermouth. The 15-second clip shows Bieber playing air guitar while he tries to recreate the guitar solo from the classic 1984 METALLICA track with his voice. Bieber is accompanied by his musical director Dan Kanter on guitar.

According to NME.com, Bieber previously revealed that he is a big fan of METALLICA, naming “Fade To Black” and 1988’s “One” as two of his favorite METALLICA cuts. “Those are my jams,” he told GQ last year.

METALLICA’s manager Peter Mensch, who has certainly seen more than his share of childish behavior, told the U.K. tabloid The Sun earlier this year that he would “take Bieber to the woodshed and spank him.”

Mensch was asked to comment on Bieber’s recent bizarre behavior, who has reportedly seen the 19-year-old pop singer being caught speeding around his neighborhood and getting into altercations with neighbors.

The 60-year-old Mensch reportedly told The Sun that he has warned Bieber that his antics would ruin his career. “His manager Scooter Braun is scared shitless,” said Mensch. “I don’t know what Bieber’s problem is. His career is over in three years anyway.”