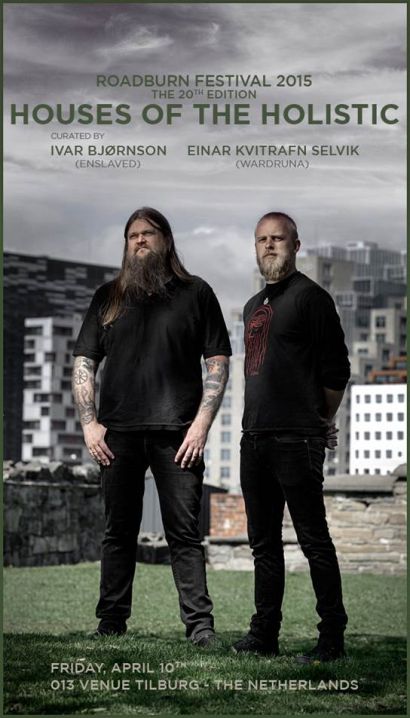 Ivar Bjørnson (ENSLAVED) has been announced as one of the curators of Roadburn Festival 2015, alongside Einar Kvitrafn Selvik (Wardruna). As curators, both Ivar and Einar will personally select the bands for their curated Roadburn event, named Houses of the Holistic, and play special shows with ENSLAVED and Wardruna respectively as well.

The Norwegian pair, both former Roadburn performers, have played an important role in bringing together the past, present and future sounds of hard rock, progressive metal, and alternative scenes, which makes them the ideal choice to carry on the tradition that began in 2008.

ENSLAVED’s performance, dubbed House Of Northern Gods, will consist of a set list specially put together for Houses Of The Holistic, featuring songs from the band’s entire catalogue that embody the Norse gods, with accompanying visuals created by revered Romanian artist, Costin Chioreanu. Be prepared for a surprise or two, or even more.

Ivar Bjørnson comments: “To say that my dream as a kid was to one day curate the Roadburn Festival would perhaps be to take it a tad too far – but it isn’t that far from the truth. There’s some ridiculously big shoes to fill, but luckily negative pressure, idea draught and performance anxiety aren’t something I’m into. It is my favourite festival in one of my favourite parts of the world; so this is nothing short of one the biggest honours I’ve been given! It is a privilege to undertake this challenge in twosome with Einar; an artist I truly feel in tune with artistically and philosophically – now it is all about hard work and dedication to ensure that the audience and the festival itself is given a Friday to enjoy, experience and remember. I for one can’t wait!”

Roadburn Festival 2015 will run for four days from Thursday, April 9th to Sunday, April 12th, 2015 at the 013 venue in Tilburg, The Netherlands. Houses Of The Holistic, co-curated by Ivar Bjørnson will take place on Friday, April 10th, 2015.