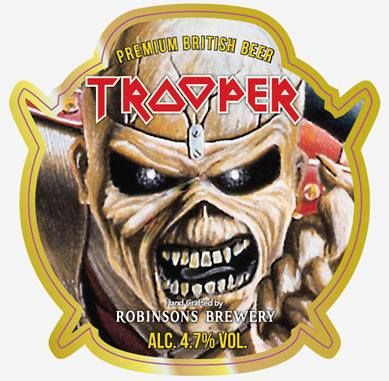 Robinsons Brewery in Cheshire, UK have issued the following update regarding the sale of IRON MAIDEN’s Trooper Beer in Sweden:

“Due to local Swedish government alcohol and marketing act which do not allow elements of war, weapons or aggression to be featured on alcoholic product we were unable to sell Trooper beer to our fans in Sweden unless we modified the label artwork. As our first and foremost priority is for our Swedish fans to be able to enjoy Trooper beer, we amended the label by simply focusing purely on Eddie’s face and are now very pleased to advise that the new label, currently exclusive to Sweden, has now been approved.

Our distributor, Brands For Fans advise that Trooper Premium British Beer should be available in Bottles in Sweden towards the end of June and delivered via orders at Systembolaget nationwide. Trooper will be also listed at restaurants and pubs all over Sweden.

Meanwhile, 500 ml bottles with the original Trooper Label can be ordered directly from Robinsons UK via Ironmaidenbeer.com.”