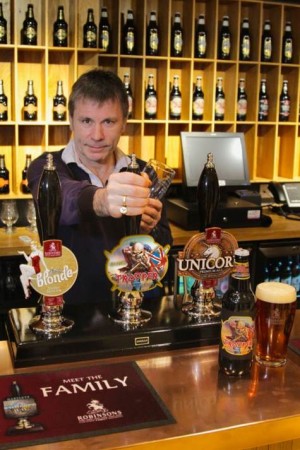 Legendary heavy metal band IRON MAIDEN recently joined forces with Cheshire family brewers, Robinsons to create a new beer, Trooper. In celebration of Trooper and the collaboration, select Robinsons pubs will have Trooper on draught from the evening of May 9. Locations are available here.

Over a hundred countries have applied to stock the band’s cask ale, and for the first time in the brewer’s 175-year history, Robinsons is brewing three batches a day. Robinsons’ David Bremner recently told a British source that they haven’t had to spend a cent on advertising and we certainly can believe it as over 250,000 pints have been pre-sold in the U.K. alone ahead of this Thursday’s release date. The brewery is best known for it’s “Old Tom” ale, international award-winning beers and has not failed in creating a buzz in the beer world for all drinking generations.

IRON MAIDEN vocalist, Bruce Dickinson is said to have played a key role in the ale’s development, paying numerous visits to Robinson’s brewery in Stockport. Dickinson stated: “An IRON MAIDEN beer is an easy sale to make noise about but the proof is when you drink it. It’s easy to piggyback on someone else’s brew and we turned down many cheap and tawdry offers, people saying that we sell records so we can sell beer. Trooper was the blindingly obvious thing to call it,” added Dickinson. “We have a tremendous piece of artwork — it’s one of the world’s most tattooed images. And it’s like Spitfire. It’s in the great tradition of British military prowess — well military disaster in this case.”

Fans of both IRON MAIDEN and real ale can sign up to get news and updates on Trooper Premium British Beer from www.ironmaidenbeer.com, where bottles will be available to purchase by both U.K. and overseas customers.