INSOMNIUM And OMNIUM GATHERUM Team Up For North American Tour 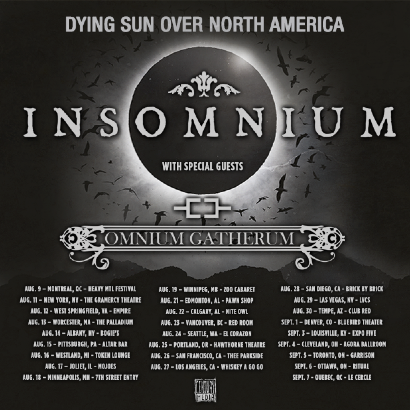 After successfully completing an extensive trek with DARK TRANQUILLITY in January, Finnish melodic death metallers INSOMNIUM are excited to announce their return to North America this summer/fall for their first ever US headlining tour. Featuring OMNIUM GATHERUM as direct support, the run kicks off at the Heavy MTL Festival on August 9th, which boasts a lineup of Slipknot, Faith No More, and more.

INSOMNIUM vocalist/bassist Niilo Sevänen comments: “We are very happy to return to North America so quickly! With each previous tour we have felt that we’ve clearly gone forward and gained new fans so now it’s the right time to bring a full headliner show across the Atlantic Ocean. We are very much looking forward to playing in Heavy MTL festival and that will be an awesome kickstart for the tour. And naturally we are more than happy to be sharing the bus and stage with our fellow Finnish brothers in death metal, the almighty OMNIUM GATHERUM! Killer shows expected every night so get your tickets way in advance. See you all soon!”

Markus Vanhala from both bands adds: “Here’s the tour that every melodeathmaniac (except my back & neck) have been waiting for – the double trouble Insomnium Gatherum tour in North America! That’s gonna a hell of a ride thru America and nice times with super dudes as both of my brotherhood camps will be staying in the same bus. The last year’s OMNIUM GATHERUM North American debut tour was a blast and also a great success, so I’m really happy to come back also with OG and have another round spin of Beyond The World Tour beyond Atlantic!”