IN SOLITUDE To Release “Sister” In October 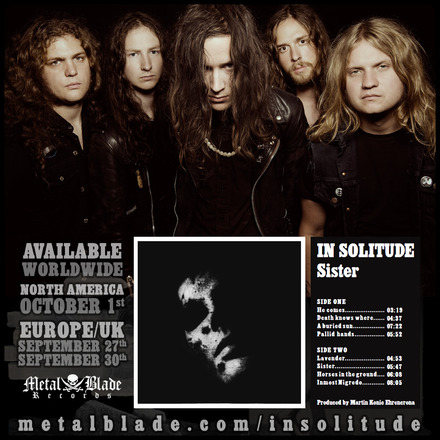 Swedish traditional metallers IN SOLITUDE will release their third album Sister on October 1st via Metal Blade Records. Fans can pre-order the CD, CD + t-shirt bundle, vinyl, at this location, as well as a digital copy via iTunes.

Vocalist Pelle Åhman speaks on behalf of IN SOLITUDE: “It’s time to release our third album, and things have never felt this clear and pervasive before. This is a feeling that has permeated our whole lives during the latest year of writing and recording this album, as well as digesting and dealing with its consequences. And it has been wonderful, overwhelming and utterly devastating. Which, in the world of IN SOLITUDE, are very positive things, and exactly what was required. It is a very special album for us, and I am very thankful and proud of my brothers (including our great friend, and producer, Martin Konie Ehrencrona), for this is truly the most visceral music we’ve ever made, and we can’t wait for you to experience it too. You come without. And all falls within. There is a light in the world. There is a stone to the head.”

Sister was recorded at Studio Cobra in Stockholm, Sweden during March 2013. The album was produced and mixed by Martin “Konie” Ehrencrona and stands as a logical next step above and beyond its predecessor, The World.The Flesh.The Devil. IN SOLITUDE’s strength resides in their ability to craft dark and oppressive atmospheres within the auditory realm of classic heavy metal. Sister compounds this trademark sound further, beginning with the acoustic intro, ‘He Comes’, and saturates the record in an aura of uniqueness; see: ‘Lavender’ and the title track.

The band will be supporting WATAIN on their Wild Hunt tour beginning on October 8th in New York City.