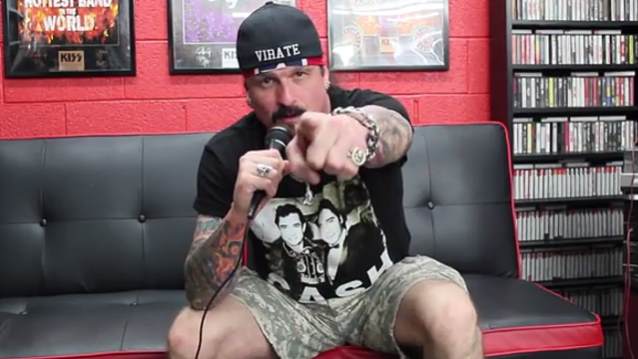 “It is with sincere apologies that I write to inform you all that ICED EARTH is forced to cancel this summer’s festivals and headline shows.

“As many of you know, I underwent surgery on my neck in the year 2000, due to an onstage injury that occurred in 1996. Since that time, I have battled with this problem, and it has begun to accelerate in the past several months, causing additional issues that can no longer be ignored.

“Surgery was originally planned to take place in September during our break, but I have now been advised to have the procedure completed sooner rather than later.

“As much as it pains me and everyone else in our camp to have to cancel these dates, this is something that cannot be put aside any longer.

“Once the surgery and recovery are completed, we will be back to work — healthy, strong, and ready to bring the metal to you, our fans.”

ICED EARTH ‘s latest album, Plagues Of Babylon, sold around 6,300 copies in the United States in its first week of release to land at position No. 49 on The Billboard 200 chart.

Plagues Of Babylon was recorded at Principal Studios (KREATOR, IN EXTREMO, GRAVE DIGGER) in Senden, Germany and was mixed at NHow Studios in Berlin, Germany. Guest vocals on “Highwayman” were laid down by VOLBEAT frontman Michael Poulsen and SYMPHONY X/ADRENALINE MOB singer Russell Allen. Guest vocals on “Plagues Of Babylon”, “Among The Living Dead”, “Democide”, “Resistance” and “If I Could See You” are by BLIND GUARDIAN vocalist Hansi Kürsch. The cover and additional artwork was created by Eliran Kantor (TESTAMENT, ATHEIST, HATEBREED).

Jon Dette (SLAYER, TESTAMENT, ANTHRAX) is sitting behind the drums for ICED EARTH’s current tour, taking over for Raphael Saini, who filled in during the summer 2013 festivals, the recording of ICED EARTH’s new album, and the club leg of the VOLBEAT 2013 tour.

Dette made his live debut with ICED EARTH on November 6, 2013 at O2 World in Berlin, Germany.