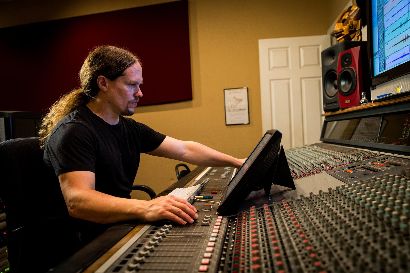 Floridian extreme death metallers HATE ETERNAL have posted the following message along with a photo: “Putting the finishing touches on the mix for the new Hate Eternal album!”

Earlier this month, Season Of Mist has announced the signing of HATE ETERNAL. Helmed by founder, guitarist/vocalist, primary songwriter and acclaimed producer Erik Rutan, Hate Eternal has been one of the leading bands in the worldwide death metal scene for over eighteen years. The band’s five full-length albums are considered crucial genre touchstones, and the band is a proven headliner across five continents.

Regarding the recording Rutan comments, “We are ecstatic about how the recording for our new album has been coming out so far, and our new label and home Season Of Mist. We’ve worked very hard on crafting these songs to reflect our path, from our past to the present, and the journey of Hate Eternal and its members. Writing this album was a long and arduous process. It took a tremendous amount of determination, blood, and sweat to bring this all to fruition. We’re super proud of what we’ve accomplished creatively, and excited at the prospect of releasing what we feel is our most powerful HATE ETERNAL material to date.”