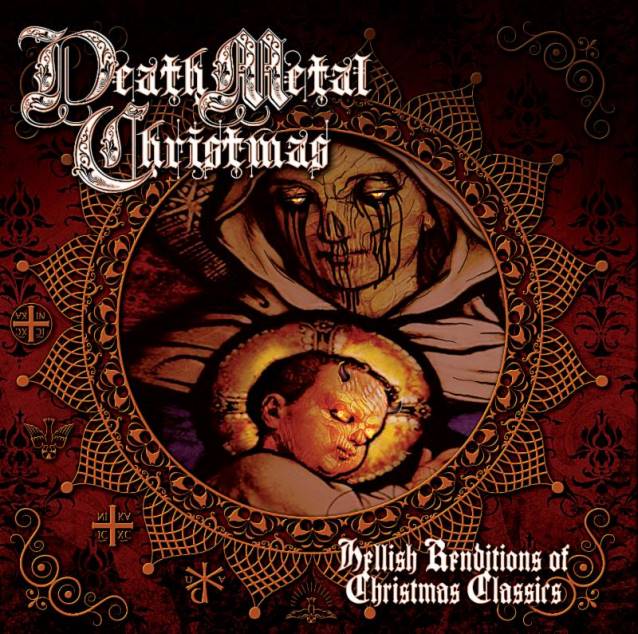 Far from a campy holiday metal record, Christmas – Hellish Renditions Of Christmas Classics comes replete with updated arrangements, blast beats, double bass drum battery, hellbound guitar solos and new lyrics with a purpose. A death metal record first and Christmas album second, the themes of the hymns were used as a foundation for the music and can mostly be heard in the right channel. Everything else was built around the theme — solo sections, intros, outros, harmonies, etc. It was important from the start that this album not be a joke, but a serious record that could survive outside of the Christmas season and thus the resulting symphony of sickness.

Since many hymns written ages ago are dark in nature, they were obvious concept choices. The lyrics have been altered to portray a possible future outcome to mankind’s current path and focus on Azrael, the angel of death in some Islam, Sikhism and Hebrew lore. The story follows a child (Azrael) born to a wealthy family heavily involved in politics throughout the generations. The child is not named Azrael but is infused with its spirit and is predestined by Abaddon (the Destroyer) to cleanse the earth of man though he does not know it yet. Azrael is never in the public eye nor is he ever elected to any position but is heavily involved in the family business of politics. He develops concepts for solutions to many of the world’s problems and seduces world leaders into designating him the de facto authority on most major issues. The world leaders implement his “solutions” over the years as he slowly awakens to his own lust for power. He is so adept at manipulating men that they crown him king either in the public eye or behind the scenes. Once this king has total authority, he betrays the world leaders who realize that they’ve been misled for years. After systematically eliminating opposition, he turns on the entire human race. At this point, Azrael is fully self-actualized and carries out acts of suffering and death throughout the world in a way never before witnessed by mankind.

Bear witness to the “Unrest For Melancholy Men (God Rest Ye Merry Gentlemen)”, the beginning of this torrid holiday tale that centers itself on Azrael’s birth and foreshadows what’s to come. J.J. elaborates: “At this stage in the story, the earth is in great turmoil, thus the melancholy men who can get no rest from their suffering. Cultures from around the world are looking for answers. The song lyrics basically warn the human race that this demon is now born and will seduce every last mind on this planet into altering their morals and convictions to suit his purpose unless man refocuses. He is not at all direct but very insidious.”

The song “Earthen Kings (We Three Kings)” can be streamed using the SoundCloud widget below. Hrubovcak states: “At this point in the story, the kings of the world have already created regional unions to help them maintain a tighter grip over citizens and global policy. This was done at the behest of Azrael, under the guise of solving other smoke screen surface issues and has already caused suffering as a by-product of new policies. Little do they know, the greatest suffering is to come. The kings of the world are bringing alms to the new king (Azrael) and continually granting him more influence over policy until he is officially crowned (in public or behind the scenes) and turns on these kings.”