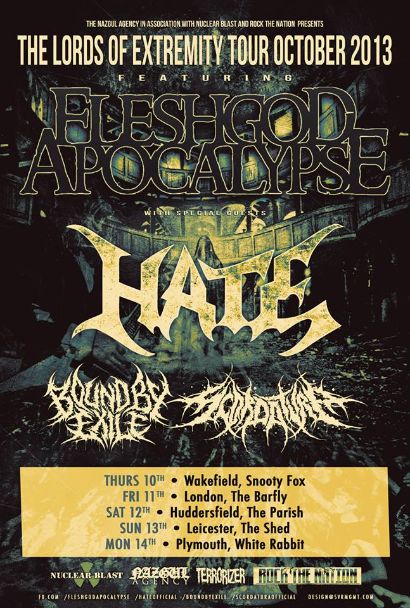 Polish metallers HATE have announced an upcoming tour of the UK in October. Teaming up with FLESHGOD APOCALYPSE on this trek, the tour has been dubbed “The Lords Of Extremity Tour”. While more dates may be added to the list soon, confirmed dates may be viewed below.

As previously reported, bassist Slawomir “Mortifer” Archangielskij of HATE passed away in his sleep on April 6. According to a posting on HATE’s Facebook page, the 27-year-old suffered from an irregular heartbeat and died of natural causes. The group added: “It is also known that Slawek suffered from asthma and had problems with breathing whilst asleep (obstructive sleep apnea).” Archangielskij joined the ranks of HATE in January 2007 and appeared on 2010′s “Erebos” and 2013′s “Solarflesh” albums.