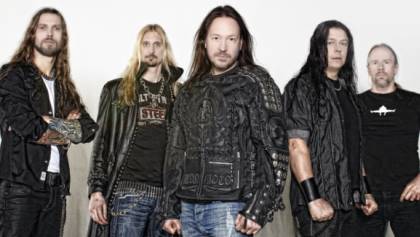 The NHL team Minnesota Wild has announced that for all its upcoming home games at the Xcel Energy Center in St. Paul, Minnesota, they will be receiving a special welcome from Swedish heavy metallers HAMMERFALL.

“When we first discovered the song ‘Fury Of The Wild’ by HAMMERFALL, it was like a gift, because everything about it fits so well to what we try to do for game presentation,” states Minnesota Wild team representative Paul Loomis. “The energy, the drive, and, of course, just having ‘Wild’ in the title makes it a perfect fit. And for the band to go out of their way to make an instrumental version rocks the State Of Hockey!”

HAMMERFALL lead singer Joacim Cans comments on the alliance with Minnesota Wild: “It’s a tremendous honor to have a team in the NHL use one of our songs as their intro, and Minnesota is a great fit due to the Scandinavian heritage of many of the state’s inhabitants.We always felt heavy metal and hockey was a great mix, and this is the ultimate proof.The State Of Hockey has got new fans in the Templars of Steel!”

The next Minnesota Wild home game is against the Arizona Coyotes on October 23. Watch Swedish defensemen Jonas Brodin and Christian Folin, forward Mikael Granlund of Finland, Minneapolis’ own Zach Parise, and the other stars of Minnesota Wild as they take to the ice with “Fury Of The Wild” blasting in the arena.