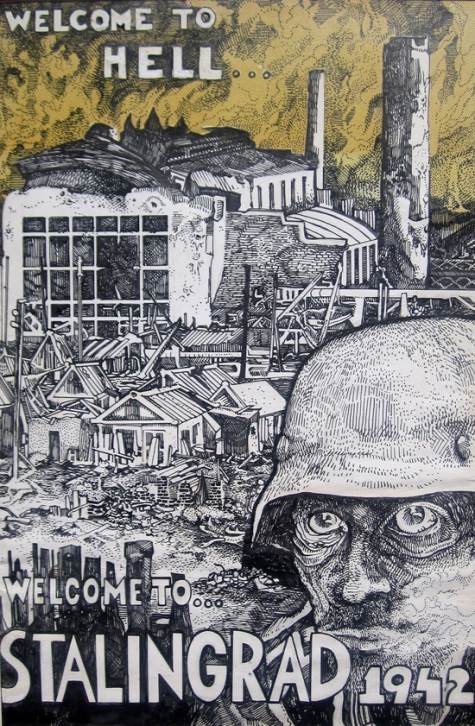 The man behind the mask of Oderus Urungus, Dave Brockie, has unveiled a new webstore where fans can buy limited-edition, high-quality art prints of not only Brockie‘s GWAR drawings, but many of his other illustrations. Culled from select images spanning a 30-year career as an artist and illustrator, these highly-collectable prints are now available to the public. Check out www.theartofdavebrockie.com

“For years I have been doing custom paintings and drawings for people and I have gotten so far behind that I constantly have to turn down people looking to get some of my work. A high-quality print line web store will give everybody a chance to have a Brockie on their wall,” said the artist fromGWAR‘s “Slave Pit”, their Richmond studio.

Dave Brockie is to many a footnote to the name most people know him by — that of Oderus Urungus, foul-mouthed alien barbarian and longtime lead singer of GWAR, the world’s foremost horror-rock spectacle. GWAR‘s legendary live shows and relentless work-ethic have earned the group of artists and musicians from Richmond, Virginia, an international reputation as the cutting-edge of outrageous, “Grand Guignol”-style metal theater, and won them legions of fans worldwide. In the course of the groups 25-plus-year-long career, Brockie, as president of Slave Pit Inc., GWAR‘s parent production company, has consistently spearheaded the groups efforts, not only as the bands lead singer and public mouthpiece, but also as an artist involved in many of GWAR‘s graphic projects.

Brockie continued on like the blowhard that he is: “I actually graduated art school even though I knew it was no guarantee of employment. Nevertheless I deluded myself that I was going to become a fine artist and was painting these giant squiggly blob paintings that actually looked pretty cool, but were never going to pay the bills. I worked construction and knocked over liquor stores to do that. But I was also into comics and illustration and when GWAR started to happen it gave me a great venue for my work. Suddenly I was being called upon to do flyers, t-shirts, comics…even album covers. That turned into a 25-plus-year stretch where I was always making art of some kind. It’s about damn time I had my own print line!”

The prints are signed and numbered by the artist and are part of a limited edition of 1000 per image. The prints use the highest quality paper and inks, and are mounted on a piece of masonite that features a custom-made 3-D frame that is a throwback to Brockie’s early “squiggle” paintings.

“I hope this is a big success,” said Brockie. “I am going on a pilgrimage to Stalingrad this spring and need money for booze and food. Plus I got kicked in the mouth by a circus-mule and need extensive dental-work. “After I get this print site going, I plan to disappear. It is time for GWAR.”

In other Slave Pit news, GWAR is wrapping up a new album, their 13th, which is the band’s first since the passing of longtime guitarist Cory Smoot in late 2011. Coming out later this year, the album features the debut of Pustulus Maximus, cousin of the mighty departed one, Flattus Maximus. The band has a run of shows scheduled for this April — the last stops of the“Fate Or Chaos” tour — which chronicles GWAR‘s epic struggle with an angry God. It has been rumored that GWAR will be testing out songs from the new album on these dates. “Yes! We will!” confirmed Oderus.

The band is also venturing into the culinary arts with a signature “GWAR-B-Q” sauce, which they will be debuting at a colossal “Meat & Meet” to be held at the world famous “Grinders” in Kansas City on Monday, April 8 from 4 p.m. to 6 p.m.

August will see the fourth annual GWAR-B-Q, the group’s annual outdoor music and meat-fest which is getting more massive every year. The new album’s release follows soon after, and then the band will embark on a mega-huge world tour that will continue well into 2014.