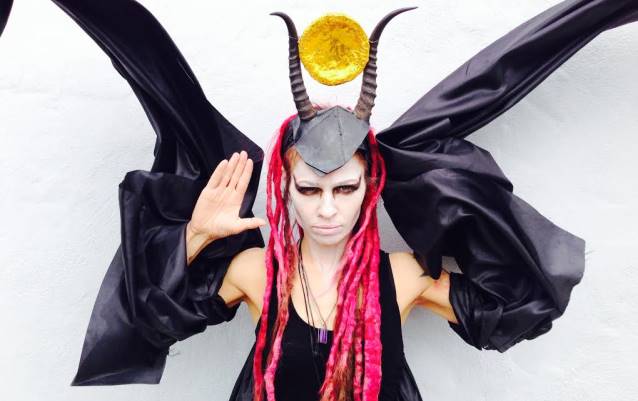 Visual artist and former CRISIS vocalist Karyn Crisis has revealed details of her newest musical project, GOSPEL OF THE WITCHES.

GOSPEL OF THE WITCHES features Crisis’ unmistakable vocals and mystical lyrics, over music composed by EPHEL DUATH mastermind Davide Tiso. With Tiso playing all guitars and bass, the all-star lineup is completed by Danny Walker of INTRONAUT on drums and Ross Dolan of IMMOLATION on vocals.

A 13-song album is currently in the pre-production stages. Tracking begins in June with producer Jamie King (BETWEEN THE BURIED AND ME) at at The Basement Recording in in Winston-Salem, North Carolina.

In addition to the core lineup, the album will contain a guest appearance by Mike Hill, frontman of TOMBS.

Karyn Crisis speaks about GOSPEL OF THE WITCHES: “The album is a bold statement and an epic, unabashedly emotional work of devotion to the ultimate expression of the power of the fires of transformation: The Witch.

“Davide has a haunting ability to generate undeniably emotional landscapes with his guitar, and these songs twist and turn into darkness and then transmute into heartbreaking beauty and light.As a testament to Ancient Ways and the union of opposites, I explore the feminine power in my voice on this album and couple it with Ross’ intensely masculine vocal power to create a consistent theme of thickly layered vocal choruses.Danny will round out these 13 dark mantras with thunderous drums. Take the tendrils of my unstoppable voice into the Great Mysteries… or run for the hills.”

A Kickstarter campaign has been launched to raise money for the recording, mixing, mastering, and manufacturing costs.

Some of the rewards for fans who donate through Kickstarter include: vinyl, CD and digital versions of the album; t-shirts; and original Karyn Crisis artwork — from a “hardbound lyric book with handwritten lyrics and drawings” to an opportunity to collaborate directly with Crisis on an original painting.

An early demo version of a new song, “Howl at the Moon,” has been posted at Kickstarter.com in video form.