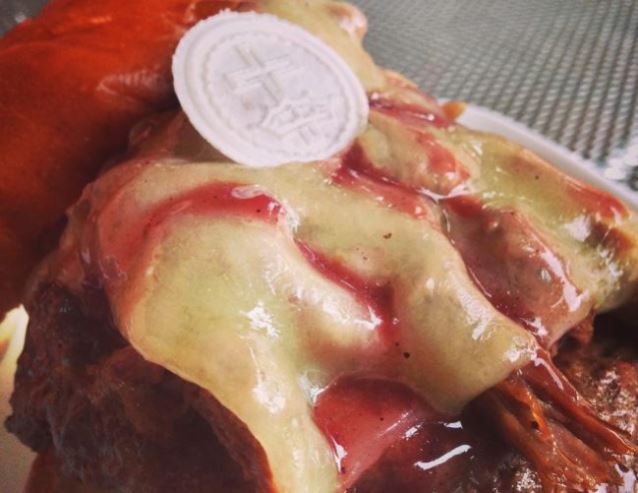 According to the Chicago Tribune, a burger inspired by the Swedish occult rock band GHOST has been causing a lot of controversy since it was first introduced by the Chicago restaurant Kuma’s Corner.

The “Ghost Burger” — a 10 ounce goat and beef patty made with a red wine reduction and topped with an unconsecrated communion wafer — has offended some people because they believe that it’s in “poor taste” to have a communion wafer on a burger.

“In the spirit of our undying reverence for the lord and all things holy, we give you the Ghost which we think is a fitting tribute to the supreme blasphemous activities carried out by the band itself,” reads a post on the Kuma’s Corner Facebook page.

Luke Tobias, the director of operations for Kuma’s Corner, admitted to the Chicago Tribune that “people have been kind of upset” about the burger, but added: “The thing with this is, the communion wafer is unconsecrated, so until that happens, it’s really just a cracker.”

“It’s not a commentary on the state of religion or anything like that,” Tobias added. “It’s literally, ‘We like this band; we think what they do is cool.'”

Jeff Young, producer of the Catholic Foodie blog, told the Chicago Tribune: “It’s not the Eucharist, but it’s still symbolic. For us as Catholics, the Eucharist is more than a symbol, it’s a sacrament. At the same time, it doesn’t mean that symbols aren’t important. … It is a mockery of something that is holy. The same thing could be said of the band itself.”