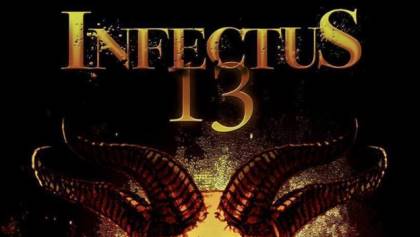 INFECTUS 13 is a recording project and the brainchild of former OVERKILL and BATTLEZONE drummer Sid Falck. After years of answering “maybe some day” when asked if he ever intended to play again, due to health concerns, “maybe someday” has become “now or possibly never.”

According to a press release, the vision for the INFECTUS 13 project is to create music that is a continuation of where Sid left off after exiting OVERKILL in 1992, but with “all the new influences and inspirations of the years since then. However it may turn out, It will be aggressive … It WILL be hard hitting!! All the while trying to maintain the ideals and the integrity that guided the music in those days. It will not be a recording of ‘Sid with friends’… and it will NOT be ‘OVERKILL v. 2. The idea is to have a lineup of musicians with whom Sid would have loved to jam and write with had they been known to him ‘back in the day,’ each musician bringing their individual talents and inspirations to the table, and, hopefully, collectively creating something that will truly excite everyone.”

When asked whom he envisioned being in the lineup, Sid said: “You know, there are so many unbelievable musicians out there whom I would just absolutely give my right arm to get a chance to jam and write with.

“I have approached a few people with the basic idea of this project and their possible involvement, and I have gotten a somewhat surprising and unbelievably positive response from them.

“I am trying to really keep things under wraps for at least a little while longer, not to try and create some kind of dramatic anticipation — I’m not famous enough for that — but simply to try and make sure everything is going to pan out, because if it’s not… It’s one thing if I fall on my ass, I don’t want to take anyone else with me. I can say that these people are musicians I have had no musical interaction with in the past.

“It would be really easy to just try and hook up with people from my past with a somewhat proven track record, write a couple of tunes, and release them and call it OVERKILL 2 or something. But that would kind of defeat the purpose of this whole thing. These will be people I admire for various reasons, and given my current health issues, this project is extremely important and special to me, so… if I offend some of the people that have appreciated my past work by not inviting the musicians of their choice, I’m very sorry.

“I am definitely not trying to sound arrogant, but this project is, for me, to kind of help me close the musical chapter of my life the way I feel it should be.”

The band’s cover of THE ROLLING STONES’ “Paint it Black” can be streamed below: