Italian extreme metal outfit EYECONOCLAST have posted the video for “Rise Of The Orgamechanism,” a song from their 2013 album, Drones of the Awakening.

The band commented on the video: “We wanted to give life to our apocalyptic vision of the future. The song is about a time when man will stop being merely human and will give birth to a new, stronger and improved version of himself through genetic manipulation and integration with technology. The new post-human being starts an evolutionary arms race with his predecessor, and humanity is no longer the dominant race on this planet. ”

The band will embark on its first-ever Japanese tour next week in support of SEPTICFLESH. 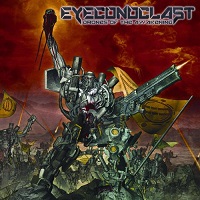