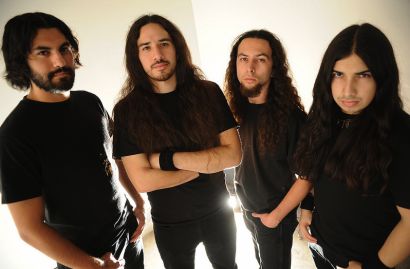 Immediately following their upcoming North American tour with DARK TRANQUILLITY and OMNIUM GATHERUM, southern California heavy metal brigade EXMORTUS will join thrashers LICH KING for a short run throughout the Eastern US in support of their forthcoming Prosthetic full-length debut Slave To The Sword, which will be released on February 4th.

Drummer Mario Moreno commented, “2013 has been a pretty exciting year for EXMORTUS. We recorded a killer album with engineer/producer Zack Ohren, got amazing album art done by Phil Lawvere, signed a record deal with Prosthetic Records and now we’re finally announcing a release date for our upcoming album. Pretty damn exciting, right? The year isn’t over, and we’re already stoked on 2014. Our relationship with Prosthetic is still fresh, but things are already off to a great start. Be sure to pick up a copy of Slave To The Sword online, in stores or on our upcoming North American Tour with Dark Tranquillity and Omnium Gatherum starting February 1st in Atlanta. See you all soon!”