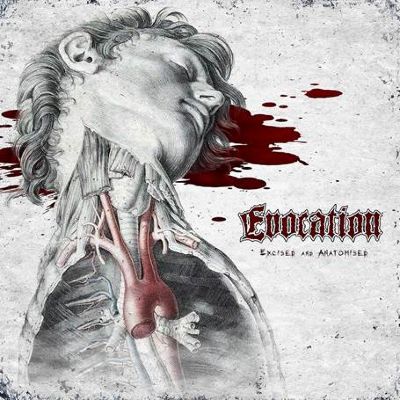 EVOCATION have finished the recording of five cover tunes that are going to be released on August 19. The EP titled, Excised And Anatomised, from the Swedish death metallers will be made available on vinyl and as digital download on August 19.

All songs were recorded at EVOCATION’s own Evocation Studios. Dan Swanö handled the mix and mastering at Unisound Studios and the cover and layout for the EP were once again created by Xaay, who has previously worked with EVOCATION on their last two studio albums.

According to a press release, “Each of the five classic songs works very well in the typical sound of EVOCATION. It’s not only homage to the ancient gods of death metal. It’s a tribute to the scene itself that EVOCATION has been part of since the band’s founding in 1991. It’s a deferential bow to the bands that have decisively influenced EVOCATION throughout the years. Excised And Anatomised is not a try to play a decent copy of a classic track. It’s a statement, an oath of allegiance to death metal.”

The vinyl version of Excised And Anatomised will be released as a 12-inch EP on 180-gram vinyl with inlay for a fan-friendly price.

Side 2:
1. Enigma (EDGE OF SANITY cover)
2. Terminal Spirit Disease (AT THE GATES cover)