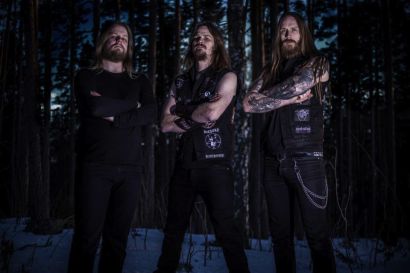 Swedish Viking trio EREB ALTOR recently finished the recordings for their fourth studio album, Fire Meets Ice. The album was recorded and mixed at Studio Apocalypse by Jonas Lindström in spring 2013 and delivers once more pure epic black/doom metal to carry on Quorthon’s spirit. Fire Meets Ice will be released on July 26th via Cyclone Empire, available as CD and limited edition LP. A lyric video for “Nifelheim” can be viewed below.

Guitarist and singer Mats comments: “Fire Meets Ice will unite the epic history with the harsher side of Ereb Altor by building huge atmospheres using echoing choirs from the snow covered mountains which at times will be shred apart by fierce and aggressive parts with screams from the darkest forests of Scandinavia creating a dynamic and varied piece of art.