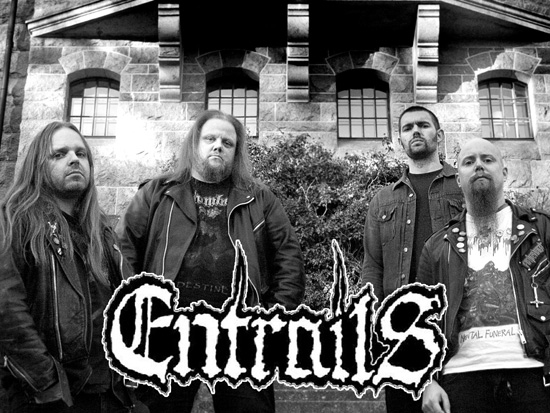 Swedish death metallers ENTRAILS have begun work on their new studio album. Guitarist Jimmy Lundqvist has resurrected the old converted woodshed that ENTRAILS used as rehearsal room in the 90’s. Behind these walls he was making some nasty riffs during the early 90’s until the band was put to sleep.

It has now become a studio/rehearsal room for the band where they can record all their music including the drums instead of hiring a studio to record some drums. But it doesn’t end there; when Jimmy was done with the studio, he was so inspired that he basically locked himself in and wrote music for days. Comments Lundqvist: “These walls have some cool memories and bring me in the mood to create, so it was a good decision to renovate that room and make it a studio combined with a rehearsal room. It took me some weeks during the summer to fix the room and of course I had friends helping me until it was done. Finally we have our own studio which will help us a lot in being even more creative”.

ENTRAILS have gathered to rehearse and will soon begin the recordings for their fourth album. The Swedish death metal machine comments further: “We will work a bit harder to do more shows in 2014 and so far we already have a few confirmed. More to follow soon!”

Raging Death, the band’s most recent album, was recorded in different studios, the drum recordings took place at the Racetrack studios while the basis recordings were done at Jimmy’s own The Crypt recording studios. The album was mixed and mastered by Dan Swanö at Unisound.